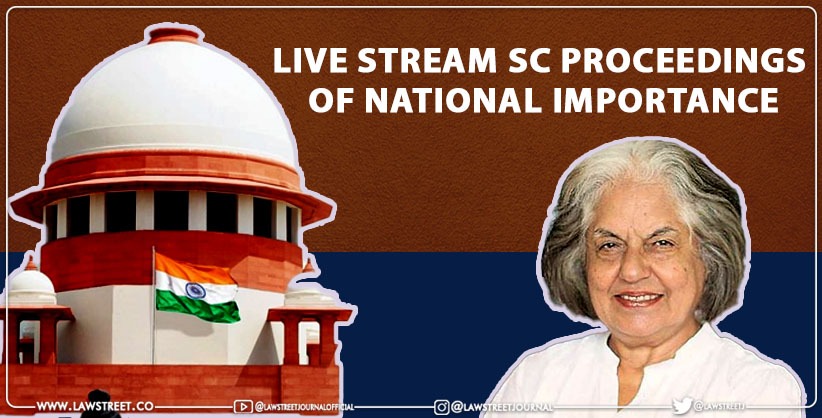 NEW DELHI: Senior advocate Indira Jaising has written a letter to Chief Justice of India U U Lalit and other Supreme Court judges for live streaming of hearings in a number of matters of national importance, saying every single citizen of India is interested in the outcome of these cases.

Referring to cases including the EWS quota, Hijab ban, Citizenship Amendment Act, she said live streaming is a part of the fundamental right of every citizen to freedom of information as also the right of access to justice

The SC in its 2018 judgement in Swapnil Tripathi case has approved live streaming of cases of national importance. Jaising also filed a separate plea which was tagged with Tripathi's case.

Referring to Article 129 of the Constitution, which states that the Supreme Court is a court of record, she requested to start live streaming the proceedings as also to keep a permanent record of the arguments by counsel on all sides to be part of the record that is preserved along with the proceedings of the court.

She said the court should have its own channel and in the meantime, it can start streaming its proceedings on its own website, as well as on YouTube.

"There is adequate infrastructure and precedent in this court for live streaming as was evident on 24.08.2022 when the ceremonial proceedings were live streamed on the date of retirement of a former Chief Justice of this Court, Justice N V Ramanna," her letter stated.

She also said there is no substitute for first hand knowledge, especially in the era of what has come to be known as “fake news” and hence, there is an urgent need for real time information.

Almost all cases now being argued in the Supreme Court related to challenges on the ground that the impugned provisions discriminated against citizens either on the basis of caste, or sex or religion or any of them together, or separately. In that understanding of the matter, every single citizen of India is interested in the outcome of these cases, she said.

How Waqf Board is unconstitutional || Challenged in SC || Exclusive with Adv. Ashwini Upadhyay