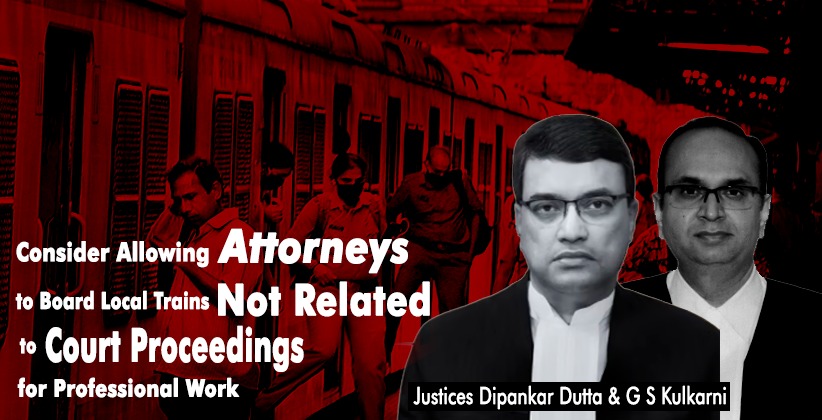 The Maharashtra government was requested by the Bombay High Court to consider allowing lawyers to board local trains for legal work and not for court proceedings. Besides, the court also demanded that the state recognize the case of lawyers who have to travel for work other than court filings.

The state has witnessed the opening of different sectors as part of the mission start program, but it has been very difficult for people to travel for work due to the restriction in the movement of local trains and other transportation facilities. The court, therefore, ordered the opening of such a mode of travel, at least in the non-peak hours, in order to be in the best interests of the staff. From the viewpoint of the daily wage workers, the employees of hotels, restaurants, etc. it is really interesting to think. who do not have the means of access to private transportation facilities and hence are extremely dependent on such public modes of transport. Further, the bench pleaded that such facilities shall also be available for legal clerks.

In such unprecedented times, it is important that people have to return to work with all the requisite precautions, and even if times are difficult, the need for the hour is to fight back. The bench gave the government time until October 29 to consider the decision. Two types that can ride in the trains at two separate hours such that social distancing expectations can be preserved were proposed by the advocate general. According to the AG's findings, trains have fewer passengers during peak hours compared to their capacity, resulting in a huge loss of revenue. It was determined that all women, regardless of their role in essential and non-essential services, would be required to work between 1100-1500 hours.

The bench decided that it would be a very difficult job, but its importance could not be overlooked at the same time. Even, in the current COVID time, the earlier metro machinery will not suffice and therefore needs to be evolved according to the conditions and precautions. There will be separate entry and exit gates necessary. The hearing for the matter is scheduled for October 29, 2020.