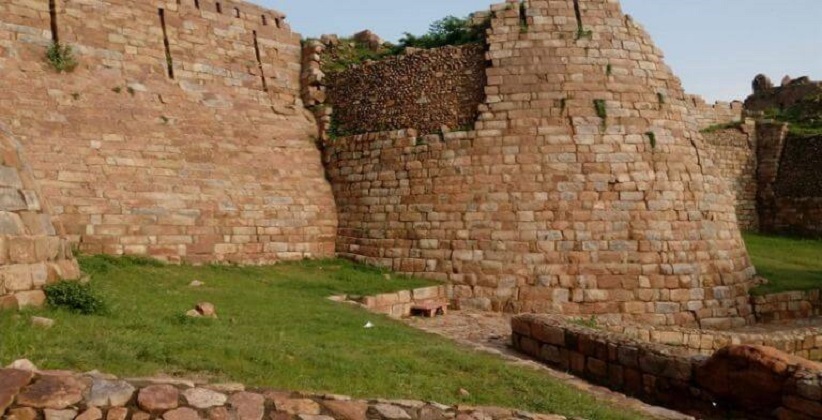 Earlier this week, a robbery case was cracked within two hours by the staff of PS Govindpuri, South-East District in which a Nixon camera had been robbed from a 19-year-old photography enthusiast. Police stated that they recovered the camera from the accused who is a Delhi University student while he was trying to sell it inside the Tughlaqabad village which is adjacent to the 700-year-old fort. It was learnt that the accused used to go inside the jungle area through the route of the fort along with his friends for consuming liquor in the evening.

While speaking to Law Street Journal (LSJ) reporter, Addl. DCP South East assured that it was a simple robbery case in which the accused had been arrested in two hours and search is on for the other associate. He also stated that there is no criminal gang behind him but it was the accused person’s greed for quick money which provoked him for committing the crime.

LSJ reporter visited Tughlaqabad Fort to gather more information on this matter. While approaching the fort premises, a number of broken bottles of intoxicants in different parts of the deserted area of the fort were found which reveals that people come inside the fort frequently and consume liquor without any fear. However, upon inquiry from the police officials, it was completely denied that any such activities take place inside the fort complex.

Interestingly, it was also found that this is not the first incident of robbery that took place inside the famous Tughlaqabad Fort. “On August 12, 2018, two young men had been robbed of their camera on the knife-point in which the victim sustained an injury on his hand after the accused attacked him,” said a security guard on condition of anonymity.

“In the evening, locals from Tughlaqabad village, Dakshin Puri, and Delvi Khanpur enter the fort through the jungle by climbing over the ruined walls and then consume drugs and intoxicants till late in the night. There is no fencing on all the three sides of the jungle which paves the way to these miscreants,” said the supervisor of SIS Security Company deployed at the Fort.

One of the guards named Sanjiv said that last year around Diwali, he stopped a group of men who had entered the fort from creating a nuisance. That time they left the place but returned at night when no PCR van was around due to change of duty and physically assaulted him. Next day the guards gave a written complaint to PS Govindpuri but no action was taken on the complaint.

The fort has become an abode of miscreants but the police do not pay any heed. Even the security guards are insecure there. Moreover, not a single CCTV camera has been installed inside and outside the fort which gives encouragement to such ruffians and mischievous persons.

One of the visitors Vijay Kumar, an amateur photographer who often visits the fort said that “Whenever I come here, I bring an escort with me apprehending a mishap. The authorities have not made adequate manual or electronic security arrangements over here, the absence of adequate security arrangements are not only risky for local visitors but also for the foreign visitors.”

A security expert once said, “He is safe from danger who is on guard even when safe”. This should be strictly followed by Delhi police of South-East district as well the Archaeological Survey of India (ASI) as far as the security of Tughlaqabad Fort is concerned. However, every time we cannot pass the buck on police, what is the moral responsibility of the area MLA and Councillor for assessing the situation in their respective areas?