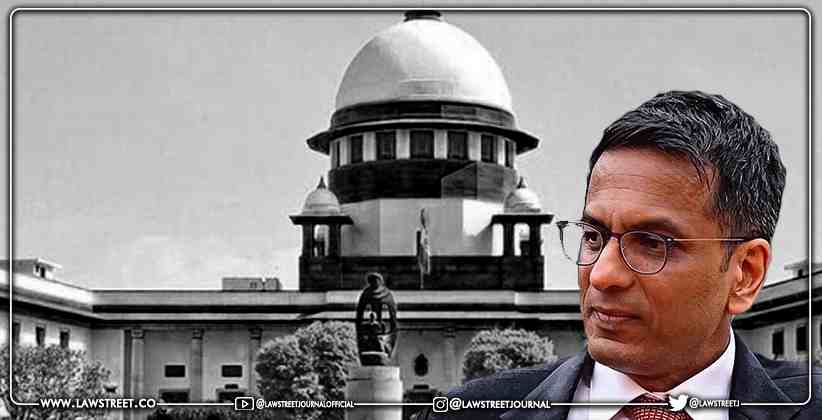 Justice D. Y. Chandrachud on 12th July, Monday, announced that the Supreme Court of India has granted a tender to a platform that would begin operations shortly for efficiency of virtual hearing.

The problem arose when the bench of Justice Chandrachud and Justice Hrishikesh Roy resumed after lunch, Justice Roy was unable to join immediately due to a technical issue. Since these VC hearings require more bandwidth, Justice Chandrachud stated that, all Supreme Court justices should be outfitted with a 1000 MBPS internet connection speed to avoid any disruptions.

It was informed to Justice, who is also the Chairman of the Supreme Court E-Committee that, “They had issued an all-India tender, to which the best players had replied, and they were all appraised. It doesn’t seem that these things weren’t looked into. They didn’t just choose any one in hurry as they are the highest court in the country. There was Google Meet, which included Jio, and many more contenders.  A technical committee was formed to analyse the offers, and the selected bidders were then presented. The contract has been awarded, and work has commenced. The system is being solidified, and the Supreme Court is in the process of transferring all authority to them.”

The Supreme Court is presently using the ‘Vidyo’ software, which has frequently been chastised for its lack of usability. It was not possible to customise Cisco Webex to provide for an open court.

A lawyer mentioned that Cisco Webex video-conferencing technology that has been operating well for other High Courts, has gained favour with the bar. Justice Chandrachud keeping this in mind said that Cisco Webex was not determined to be acceptable for the Supreme Court since it did not allow for “open court” sessions. The judge was told that they had already looked into Cisco as well, but Cisco WebEx was deemed unsuitable for the Supreme Court. The Supreme Court is a public forum, unlike the Delhi High Court, access to the proceedings is not limited to the attorneys who would be appearing in the case. Cisco was unable to customise it upto the remark and settings of the Supreme Court of India.

Justice Chandrachud mentioned, for the High Courts, the E-Committee is left for the Chief Justices to decide their platform depending upon their local configuration and other factors. “Madhya Pradesh uses Jitsi. Gujarat High Court is continuing with Zoom. The Bombay High Court uses WebEx”, explained the judge.

The bench was informed that the Telangana High Court has established a system of permanent links via which anyone can enter and depart at any time, making it no distinct from a regular court.

To which Justice Chandrachud replied, “Ultimately, it depends on the task, which is to be performed and the character of the court; there is no such thing as a one-size-fits-all solution. The need for linkages is quite strong for the Supreme Court, which is the country’s top most court. For example, if there is one PIL, there may be more than 50 persons who would want the link for it.”

The judge also stated that under the new software which is being implemented, the court will have the authority to silence the participants, guaranteeing that there are no disruptions and that everyone except the attorneys presenting in the case, are muted.

Justice Chandrachud further stated that all Supreme Court Justices are provided with 1000 MBPS internet connection speeds to eliminate any disruptions, as these VC hearings require a larger capacity. There is also a backup data link which would be made available to everyone.