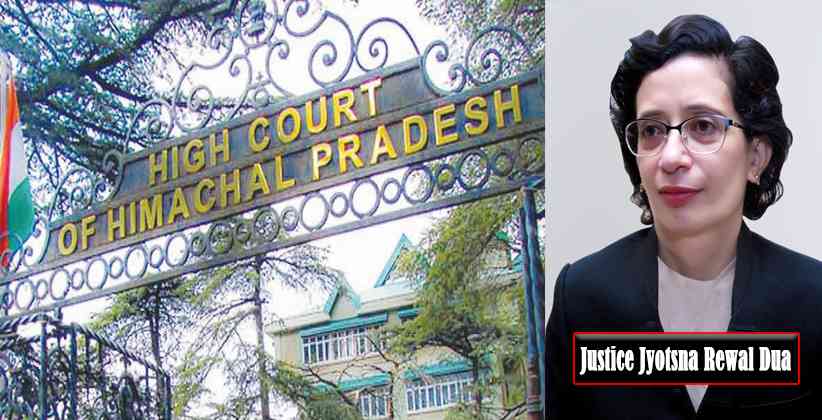 Justice Jyotsna Rewal Dua was sworn in as a judge of the Himachal Pradesh High Court on Tuesday, 28th July 2020. Keeping in mind the COVID-19 guidelines, there was no formal ceremony held. On the other hand, the ceremony held was telecasted via YouTube. She was administered the oath of office by Chief Justice L Narayana Swamy of the High Court. Previously she served as the additional judge of the high court.

Justice Dua was born on 25th May 2020 in Sirmaur and graduated from Government Degree College, Nalagarh in 1988. She obtained her LLB from Himachal Pradesh University in 1991 with three gold medals and was a recipient of merit scholarships and certificates. She was enrolled as an advocate in the Bar Council of Himachal Pradesh in December 1991 following which she started independent practice.

During initial years of practice, she also appeared before the court of the divisional commissioner, Shimla, financial commissioner (revenue), Shimla, and HP State Consumers Disputes Redressal Commissioner, Shimla. She mostly dealt with civil, constitutional, environmental, and service matters. She was designated a senior advocate in July 2015 based on her illustrious practice primarily in the High Court and before the state administrative tribunal.

Justices T.S. Chauhan. Sureshwar Thakur, Vivek Singh Thakur, Sandeep Sharma, Chander Bhusan Barowalia, and Anoop Chitkara attended the ceremony via videoconferencing. The ceremony proceedings were carried out by Registrar-General Vijender Singh. He read out loud the warrant of appointment issued by the President.

All India Bar Examination Postponed by the Bar Council of India