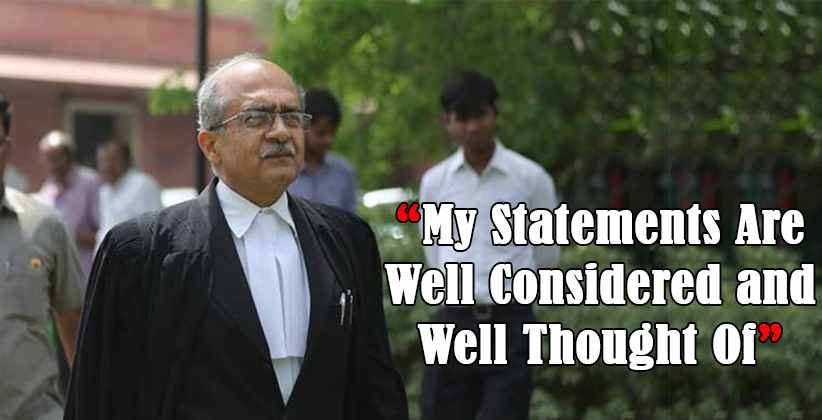 On Thursday (August 20,2020), Advocate Prashant Bhushan has declined the Supreme Court’s offer for taking time to reconsider his statement made by him in the Court justifying his tweets and expressing dismay at the contempt verdict. Today during a hearing on the sentence before a bench led by Justice Arun Mishra, Advocate Bhushan submitted that his statements were “well-considered and well thought of”. He mentioned that he does not wish to reconsider his statements and giving him more time to think upon it would serve no useful purpose.

These remarks were made when the Justice Mishra offered giving an opportunity to Mr. Bhushan to reconsider or rethink these statements and come back after 2-3 days. After Justice Mishra statement that the Court will give time to think over, Advocate Bhushan replied:

“If your lordships want to give me time, I welcome. But I don’t think it will serve any useful purpose and it will be a waste of time of the court. It is not likely that I will change my statement.”

“We will give you two-three days' time. Think over. You must think over. We should not give verdict right now”, Justice Mishra replied.

This occurred when Prashant Bhushan made a statement during today’s hearing on expressing his dismay at being held guilty of contempt, despite his efforts to uphold the majesty of the Court.

“ My tweets were nothing but a small attempt to discharge what I considered to be my highest duty at this juncture history of our republic. I did not tweet in a fit of absentmindedness. It would be insincere and contemptuous on my part to offer an apology that expressed what was and continues to be my bonafide belief. Therefore, I can only humbly paraphrase what the father of the nation Mahatma Gandhi had said on his trial I do not ask for mercy. I do not appear to magnanimity. I am here, therefore, to cheerfully submit to any penalty that can lawfully be inflicted upon me for what the court has determined to be an offense, and what appears to me to be the highest duty of a citizen”, he said.

Senior Advocate Rajiv Dhavan, who appeared for Advocate Bhushan highlighted that the nature of the person should also be taken into consideration during sentencing. Advocate Dhavan submitted two facts which were important for sentence. Firstly, the nature of the offense and secondly, nature of the person. He said that the character and contribution of Advocate Prashant Bhushan, have undertaken numerous pro bono cases in his career to bring about judicial reforms and ensure access to courts must be taken into account for the purpose of the sentence. He further added that the court should consider the nature of Mr. Bhushan and assess, whether he is attacking the court or is criticizing it for improving the administration of justice.

He referred Section 13 of the Contempt of Courts Act clause (a) which says that no court shall impose a sentence under this Act for contempt is of such a nature that it substantially interferes or tends substantially to interfere with the due course of justice.

On the basis of these submissions, Justice Mishra was prompted to note the “impressive list” of cases taken up by Mr. Bhushan pro bono, and he consulted with the Attorney General if Mr. Bhushan should be given more time to think over the matter once again. The bench clarified that they should not consider the proposal of not punishing Mr. Bhushan unless he rethinks his statements. Justice Mishra said that the bench will have to consider if Bhushan’s statement was a ‘defense or an aggravation’.