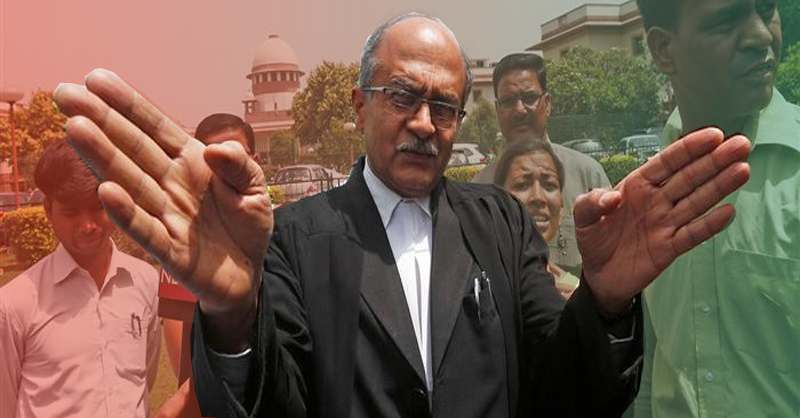 Prashant Bhushan on September 12, 2020, submitted a plea in the Supreme Court of India through his lawyer Kamini Jaiswal seeking an intra-court appeal against the conviction in a contempt case. He opined that in an original criminal contempt case a person has the right to appeal or specifically saying a ‘right to intra-court appeal’ before a larger and different bench. Advocate Prashant Bhushan was held guilty for contempt of court for two of his tweets. In a plea filed by his lawyer Kamini Jaiswal, Prashant Bhushan sought a declaration that a “person convicted for criminal contempt by this court, including the petitioner herein, would have a right to an intra-court appeal to be heard by a larger and different bench”.

Before on August 14, 2020, the apex court in order by the bench headed by (Retd) Justice Arun Mishra and comprising of Justice B R Gavai and Justice Krishna Murari held Bhushan guilty for two tweets which constituted as a “scurrilous/malicious attack on the entire Supreme Court”. Later on August 31, 202 Bhushan was fined with Rs. 1, after he was sentenced.

The writ petition filed said “Writ Petition under Article 32 of the Constitution of India for the enforcement of the rights guaranteed under Articles 14, 19 and 21 of the Constitution, seeking an intra-court appeal and for framing of rules and guidelines for the same against conviction in original criminal contempt cases in Supreme Court”.

The petitioner filed the plea for intra-court appeal on several grounds. The petitioner argued that the right to appeal is a fundamental right under Article 21. The plea said that under Section 19 of Contempt of Courts Act, an intra-court appeal lies “as a right” against an order of decision of a single judge to a bench of not less than two judges of the High Court and in case order or decision by a division bench, an appeal shall lie to the Supreme Court. Such safeguards are provided to deliver justice and to avoid any miscarriage of it or any sought of abuse of power, but when a judgment is passed by SC in its original jurisdiction there is no provision appeal in any forum and it is hence it is contended that accused if being deprived of his right to appeal. Further, they also contended that the right to appeal in a criminal conviction flows from Article 21 of the Indian Constitution and is part of natural justice, and also it is a substantive right. The SC through its judgment in various cases has clearly shown that right to appeal flows from Article 21. The cases being M.H Hoskot v. the State of Maharashtra (1978) 3 SCC 544, Dilip S. Dahanukar v. Kotak Mahindra Co. Ltd., (2007) SCC 528, Garikapati Veeraya v. N. Subbiah Choudhary [AIR 1957 Sc 540].

They argued that in the case of Maneka Gandhi v. Union of India (1978) 1 SCC, the apex court held that “any procedure established by law depriving an individual of their life or personal liberty has to satisfy the touchstone of Article 14 and 19 i.e. such a procedure must be fair, just, non-arbitrary and reasonable. And an accused convicted and not given the right to appeal is a violation of Article 21” and here the procedure established violates Article 21, 14, and 19 hence the intra-court appeal should be allowed.

They further contended that the right to appeal is an absolute right under international law. India in 1976 ratified the International Covenant on Civil and Political Rights (ICCPR) whose Article 14(5) states that everyone should get a chance to appeal and judgment should be reviewed by a higher tribunal. Relying on Terron v. Spain Comm. 1073/2002, U.N. Doc. A/60/40, Vol. II, at 111 (HRC 2004) that contended that the right to appeal in a criminal conviction is absolute, even if the verdict is determined by the highest national court. In order to prove the international law is legally binding, reliance was placed on the case of Gramophone C. of India Ltd. v. Birendra Bahadur Pandey, (1984) 2 SCC 534, which says that that ratified international laws would be read as domestic laws if there is no conflict between the international law and any other domestic law and therefore right to appeal against criminal conviction is legally binding and is an absolute right in India according to international law.

They also argued for inherent bias and said that the petitioner was on the mercy of the single bench and the contempt proceedings are those where the SC acts as prosecution, witness, complainant, judge and hence chance of inherent bias and also the power of SC to convict unlimited and arbitrary and no one can be suitor and judge at the same time hence intra-court appeal is required. They also said it is a violation of Article 19(1)(a).

They further contended that Section 13(b) of Contempt of Courts Act, 1971 says, that one bench may not be able to see the truth but other bench or higher bench may be able to see and they also said that it is a violation of Article 14 of Constitution of India as a similar contempt in HC has right to appeal but that in SC has no right to appeal hence it violates Article 14 and also that petitioner has not filed any petition before any court and hence there is no remedy available to him apart from this.

The petitioner through the lawyer prayed to issue a writ so that the petitioner has a right for an intra-court appeal and also issue a writ that conviction held in Supreme Court in original criminal contempt can be appealed in an open court by a different bench.

Prashant Bhushan, in 2009 was also been sued for contempt of court when he gave an interview in ‘Tehelka Magazine’ when he said about corruption prevalent in the judiciary. In 2019 again contempt was filed by Attorney General in the Supreme Court of India.