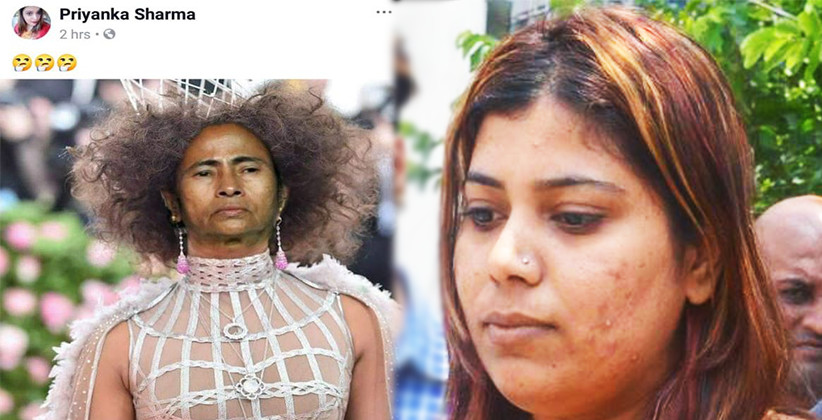 Day after the arrest of Priyanka Sharma of Bharatiya Janata Yuva Morcha (BJYM) youth wing convenor, her mother claimed that she was arrested because she used to work for BJP.

Priyanka Sharma was accused of sharing a photoshopped photo of West Bengal Chief Minister Mamata Banerjee on social media. After the complaint was filed by TMC leader Bivas Hazra, she was arrested on Friday and sent to jail for 14 days.

Her brother said, first he was not allowed to meet her but when he pressurised the authorities they agreed with him to meet his sister. He also claimed that every movement inside the premises was not recorded not even at the entry gate therefore his sister security was at risk, at the end he stated that "I will take the matter to Supreme Court to save my sister." He also said that Poonam Mahajan, BJP leader called him to Delhi.

District president of BJYM said that it’s nothing wrong with what Priyanka Sharma did on social media, but her arrest was wrong. "Social Media is a platform where everybody wants the freedom to express. It’s shameful that West Bengal Chief Minister Mamata Banerjee is curbing freedom on that platform. Ms Priyanka Sharma had just shared an edited photo which was already viral on the platform. There is nothing vulgar or shameful in the photo. We have ideological differences with TMC, but we have never disrespected her."

Woman sold off by father for Rs 10k