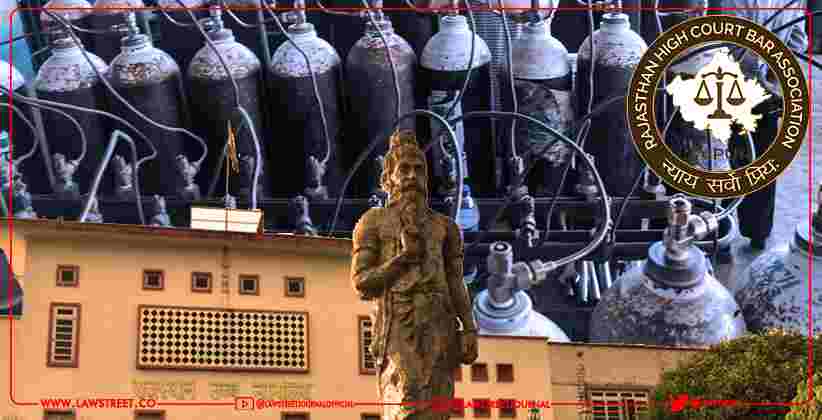 The Chief Justice of Rajasthan High Court Indrajit Mahanty has decided to treat the letter by Rajasthan HC Bar Association as a Public Interest Litigation. The letter raises concerns about the lack of supply of medical Oxygen in the COVID care centres of the state.

The letter by Bhuvnesh Sharma, the Bar Association President, says that patients are suffering in all districts of the state.

It is alleged in the letter that the Central and State government are not taking responsibility and is blaming each other for the failure. It is argued that amid these political quarrels the people of the state are the ultimate sufferers.

The letter states that there is a lack of coordination in the Centre and State government as they represent different political parties. The letter called for the intervention of the High Court to give directions to both the governments to ensure an uninterrupted supply of oxygen to the hospitals.

Accepting the request of the bar association the Chief Justice converted the letter into a Public interest Litigation and posted it for hearing today.

While some are blaming the increased export of medical oxygen as the cause of the shortage, experts in the field opine that the production of medical oxygen is sufficient to meet the increased demand. The experts point to logistics and distribution bottlenecks as the cause of the felt shortage. It is also reported that the second wave of infections is characterised by the earlier appearance of symptoms like shortness of breath almost doubling the need for medical oxygen.

Judiciary Aug 19, 2021 Saakshi S. Rawat ( Editor: Ekta Joshi ) 5 Shares
5 Shares
The Rajasthan High Court recently rejected special protection to a married woman who is living with some other partner and seeking protection from certain private individuals who are unhappy with her engagement.Justice Satish Kumar Sharma's panel cited a previous Allahabad High Court ruling in which the Court rejected a married woman residing with her partner's safeguard petition at an exorbitant cost of Rs.5,000, indicating:"No law-abiding individual who is already registered under the Hindu...
Read full post

Judiciary Jul 16, 2021 Nancy Goyal ( Editor: Ekta Joshi ) 6 Shares
6 Shares
The Rajasthan High Court has directed the Child Rights Department of the State Government to conduct training of Principal Magistrates in Juvenile Justice Boards for sensitizing them with the Juvenile Justice Act, 2015.The Division Bench comprising Justice Manoj Kumar Garg and Justice Sandeep Mehta passed these directions on July 13,2021, during the hearing of a Suo Motu case based on a news report published in ‘Dainik Bhaskar’ relating to the miserable condition being faced by the oral and...
Read full post