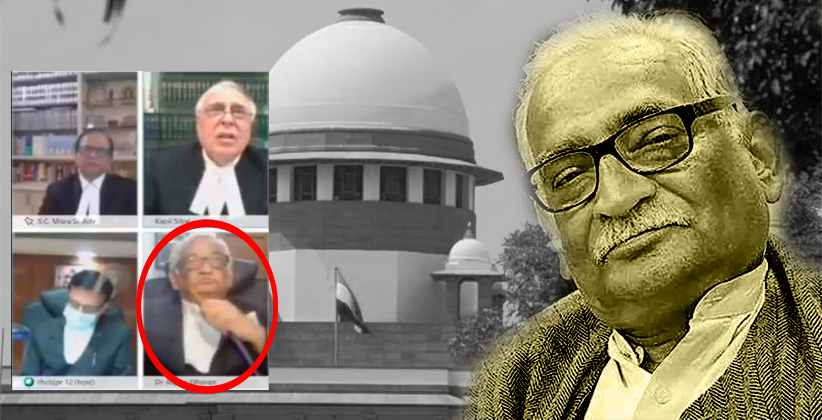 Recently, a video clip went viral highlighting Mr. Rajiv Dhavan smoking hookah during the virtual hearing in the case of Rajasthan Political Crisis matter before the Supreme Court. This gathered a lot of attention and criticism across the Bar. Lawstreet Journal (LSJ) was the first to break this news to its readers and the public in general.

The viral video has now formed the basis of a recent plea in the SC. The petition filed before the honorable Supreme Court seeks for Dr. Rajeev Dhavan's senior designation to be reviewed after he was seen smoking hookah during a video conferencing.

The petitioner before the Supreme Court, Rashid Pathan, affirms Dhavan's act was "disgraceful in soiling the hallowed gown of Senior Counsel" and falls within the ambit of Section 2(c) of the Contempt of Courts Act read with Bar Council Rules relating to advocates' code of conduct. The plea reads:

"Under Rule 1 & 2 of Bar Council of India, Code of Conduct Rules, enjoins an advocate to act in a dignified manner before a Court & with self-respect. The term Court certainly includes a virtual Court, and the adherence to dignified conduct is a ‘must’ without any known exception for a designated senior advocate."

Withstanding this recent incident, the appeal additionally rakes up past instances involving Dhavan, wherein he had warmed trades with Judges of the Court.

The solicitor guarantees that the act like a Senior Advocate like Dhavan, which can defame the institution, likewise influences the applicant's right "of having a reputed and majestic judiciary un-un-smeared by senior advocates, for example, respondent-1 Mr. Rajiv Dhavan". All things considered; the applicant has appealed for Mr. Rajiv Dhavan to be deprived of his 'Senior' designation.

The petition filed in Supreme Court states that "...the conduct of Mr. Dhawan has smeared the image of Senior Counsel Designation synonymous with being carte blanche, to act pompous and roughshod the dignity of Honorable Courts.