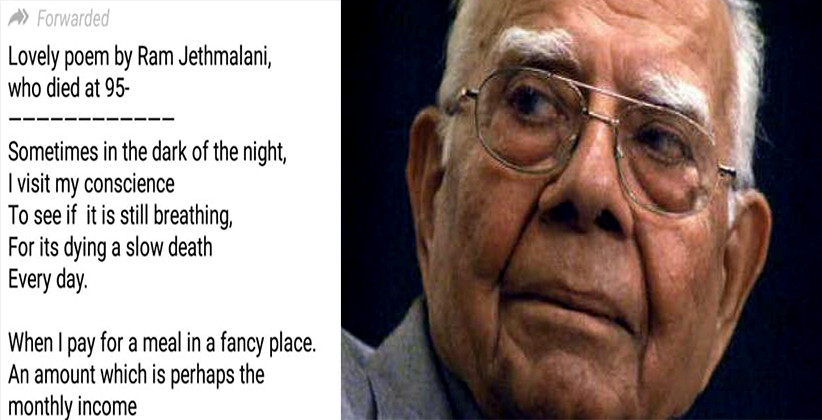 A poem is being shared widely on social media with the claim that it was penned by eminent lawyer Ram jethmalani, who passed away on September 8, 2019.

The message, which began being circulated post his death, says that it is a “Lovely poem by Ram Jethmalani, who died at 95.”

As per a report published by the Quint, this poem is not actually written by Ram Jethmalani but by an author named Rashmi Trivedi.

After running a search with the first few lines on the poem, the Quint came across a result from the Siasat Daily, an Indian Urdu-language newspaper, which attributed the poem to Rashmi Trivedi. The poem on their website, titled “My dying conscience” was dated December 1, 2017.

The poem is part of a book titled “Handful of sunshine, pocketful of rain” which is a collection of Trivedi’s poetry.

The author has also uploaded her entire poem on her official Facebook page on December 2, 2017. Therefore, it does seem like it was Trivedi who wrote the poem and the claim doing the rounds with this poem is fake.