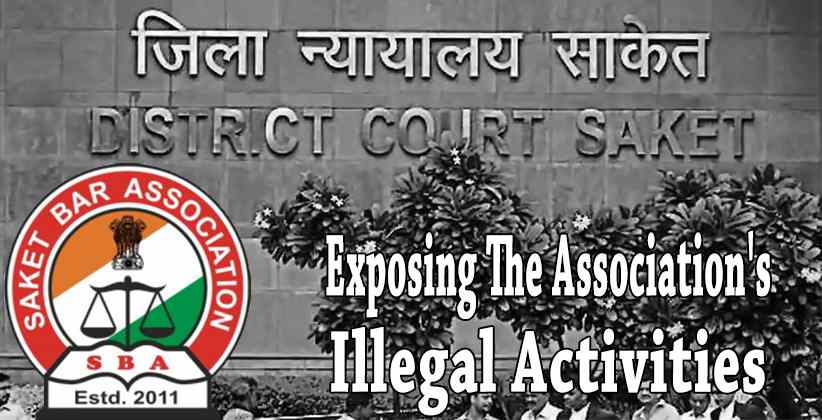 As reported on 25th February, 2020, the situation that has transpired in the Saket Bar Association, Delhi is very upsetting. The Saket District Court has been known to have a poor performing bar association history. It has been alleged that the officer bearers of association are only interested in staying beyond the allotted tenure and are not concerned in undertaking any welfare activities as such. There has been no new creation of seats or any new chamber allotments. The executive body has not opposed this either. According to Advocate Narendra Sharma, a Saket Bar Association member the violation of the Constitution of India is taking place here.

"Bar can create and allot spaces to Cafe coffee day, chai peene hai, tea vendor, photocopiers but no space for members. Do we want such office bearers to remain busy in laying stones of their names. It's time to think," he said.

Further to which, he has said that no audit report, income expenditure details have been placed before the house by the executive body that was required to do so otherwise. The body has taken a decade to get the chambers allotted to Advocates. 70% of the eligible voters of the bar association do not have chamber/seats and the future looks bleak.

Elections are also not being conducted in time and when it does conduct Elections, illegality prevails in the appointment of the people. This was taken in consideration at the meeting held on 24th February, 2020 concerning the appointment of Soham Prakash Verma as the Chairman and other 20-22 returning officers of the Election Commission by the executive body. The provisions of appointment are being violated. Unethical practices in the court campus have not been stopped.

The Saket Bar Association had filed a complaint in the Election Commission seeking to hold timely elections around 1 and half years ago.

Further more, Advocate Sharma says that many proofs of grievances will come to the spotlight in the future. "The member of the Bar association have been protesting and raising their voices for a long time now, yet no solutions have been achieved."