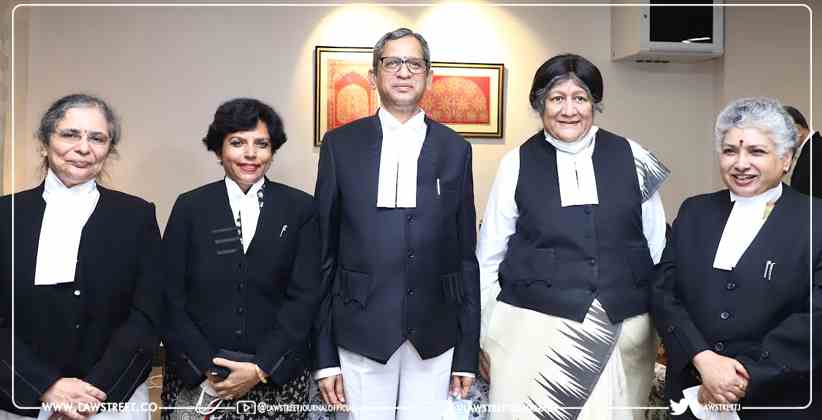 The Hon’ble Supreme Court celebrated the first ever International Day of Women Judges.

As directed by the Hon’ble Chief Justice of India , the Registry of the Hon’ble Court hosted a special programme which was held on the online platform at 5 pm yesterday (10 March, 2022).

The event was organized in furtherance of a United Nations General Assembly resolution which had resolved on April 28 “ to proclaim 10 March of each year as the ‘International Day of Women Judges’. Also and called upon the Member States to observe the same, ‘in order to promote the full and equal participation of women at all levels of the judiciary’. The resolution moved to this effect by Qatar in the UN General Assembly was sponsored by India, among others.

During the celebration of “ International Day of Women Judges” the Hon’ble Chief Justice expressed gratitude towards  the Secretary-General and Registrars of the Supreme Court, Registrars of various High Courts and the Technical Staff of Supreme Court and all the courts across the country and NIC for organizing this event at a very short notice of two days.

The Hon’ble Chief Justice exclaimed that the Hon’ble Justice Ms. Hima Kohli who reminded me of this ‘Day’.

“I must admit, only after that reminder, I solicited the suggestions of all the Sister Judges from Supreme Court and instructed the Registry to organise this event accordingly”

After that the Hon’ble Chief Justice of India Shri Justice N.V. Ramana commented that he was happy to know that India was among the nations that sponsored the resolution moved by Qatar before the United Nations General Assembly which resulted in March 10 , being declared as “ International Day of Women Judges”.

The Hon’ble Chief Justice reminisced the childhood days by saying:

“My life has been shaped by strong and exemplary women. I grew up as the youngest brother to two sisters. My mother, though not highly educated, was worldly-wise and taught me invaluable lessons of life. For the last nearly four decades, I am being supported and guided by the wise counsel of my wife. I am also a proud father of two daughters. Bringing them up was a great learning for me”.

Going on with the speech the Hon’ble Chief Justice C.V. Ramana talked about systemic prejudices women have been facing, particularly in the Indian society. One of the main reason for the continuing battle of women in spite of acquiring sufficient skills and knowledge is the lack of adequate representation at the helm of affairs

Further , the Hon’ble Chief Justice stated that only 4 women Judges are there in the Supreme Court which is the highest ever in its history.

The Hon’ble Chief Justice  pointed out that:

Speaking about the time when the Hon’ble Chief Justice started his tenure he expressed his concern about the less numbers of Women Judges working in the different Courts.

“I have been trying to do my best to correct this imbalance in our judicial system. After I assumed the office of Chief Justice of India, we have so far filled 9 vacancies in the Supreme Court out of which 3 vacancies were filled with women. I thank my Brother judges in the Collegium Justice Lalit, Justice Khanwilkar, Justice Chandrachud and Justice Nageswara Rao”.

“For the High Courts, we have recommended so far 192 candidates. Out of these, 37, that is 19% were women. This is certainly an improvement over the percentage of incumbent women judges in High Courts which stands at 11.8%. Unfortunately, so far only 17 of the 37 women recommended to High Courts were appointed. Others are still pending with the Government”.

There are numerous reasons behind the under representation of women in judiciary.

The Hon’ble Chief suggested that there is a need to create enabling environment for women to pursue their career in law. Balancing personal and professional life is a huge challenge for women. Though they excel as students, the domestic issues prevent them from pursuing their passion. This is where the family, fellow members of the Bar and the Bench need to provide necessary encouragement.

“A woman being a natural multi-tasker is bound to succeed in any given profession. But, if she is dependent on only a few personal briefs which come her way, her appearance before the courts is minimised. The bench will also not be in a position to recognise her. Hence, women should be given preference while making appointments as panel advocates which will pave their path to the bench. The need of the hour is sensitisation and emphasis on inclusivity”.

At the end of the programme the Hon’ble Chief Justice of India Shri C.V. Ramana concluded the speech by citing the examples of famous women role models in the field of law .

The recognition of 10th March as ‘International Day of Women Judges’ is an important step to create awareness and mobilise political will.

“ I am a strong proponent of affirmative action. To enrich the pool of talent, I strongly propose reservation for girls in legal education. The data proves such a provision has yielded encouraging results in appointing women judicial officers at the district level”.

“I had borrowed from Karl Marx and said, “Women of the world, unite; You have nothing to lose but your chains.” That call of mine was sought to be projected as instigating a revolution. If giving women their due share is a revolution, I would be very happy to be branded as a revolutionary. I whole heartedly welcome such a revolution.”