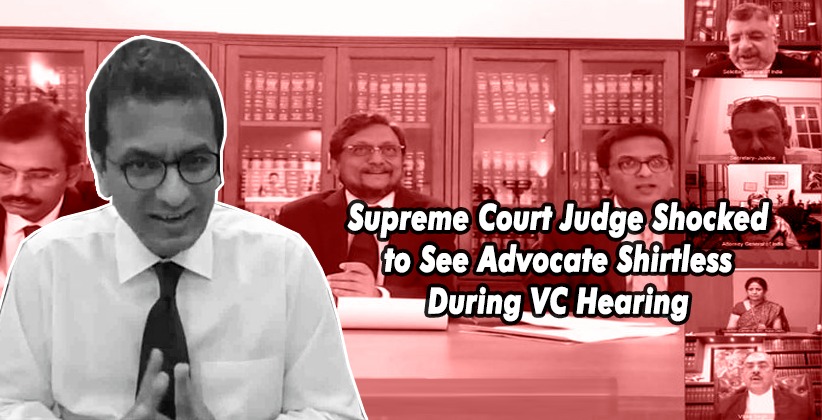 Recently,a Supreme Court judge was utterly shocked when an advocate appeared shirtless for a video conference hearing of the case.

The Supreme Court hearings are being conducted online due to the pandemic.

Justice DY Chandrachud who presided over the bench during the hearing Sudarshan TV case was startled at the image of the lawyer being shirtless.

He has also expressed his resentment against such casual behavior.

Justice Indu Malhotra who was also part of the bench was also disgusted with the incident and said that such action was unpardonable.

The advocate was the counsel for portal OpIndia in the Sudarshan TV case.

Opindia.com has filed an application in the Supreme Court seeking impleadment in the case regarding Sudarshan TV's show on 'UPSC Jihad'.

As the session started, the image of a lawyer without a shirt flashed on the screen for a few seconds and despite Justice Chandrachud asking several times who the advocate was there was no response.

Justice DY Chandrachud expressed shock at the incident and asked Solicitor General Tushar Mehta to speak with the lawyer concerned to ensure that the mistake was not repeated.

He said that he does not want to take action in such incidents but lawyers need to be extra cautious when they appear before the court, the report said.

The lawyer for OpIndia confirmed that the mistake was indeed committed by him and he explained that he was dressed for a religious function and inadvertently appeared on the screen.

The lawyer was performing Vijayadashami puja in his house and was wearing the only dhoti without a shirt.

He exited the meeting upon realizing that he appeared on screen without a shirt.

He told FP that he has already spoken to Solicitor General Tushar Mehta over the matter and will write an email with an explanation and apology for the same.