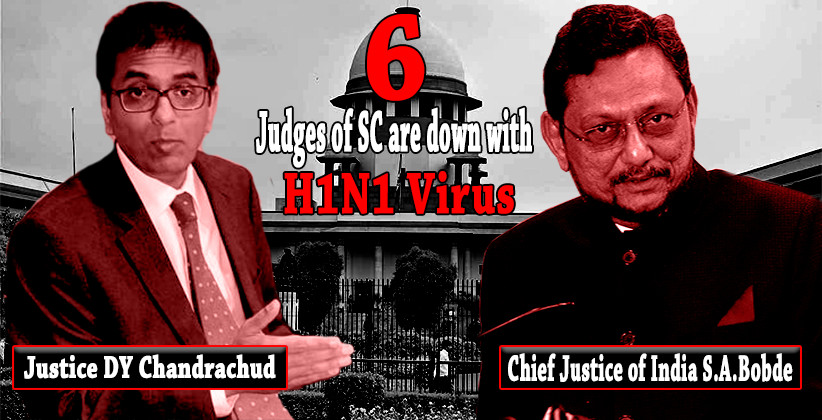 On February 25, 2020, it was revealed by Justice DY Chandrachud in the court that six Supreme Court judges have been infected with swine flu which is caused by the H1N1 virus. All the judges had a meeting with the Chief Justice of India SA Bobde regarding preventive measures to be taken.

Justice DY Chandrachud said he had asked Justice SA Bobde to direct the inoculation for those working within the Supreme Court from the H1N1 virus. Judge Sanjeev Khanna was seen wearing a mask to the court today (February 25, 2020). Justice Arun Mishra requested everyone not to come to the court if they are not feeling well as there was an outbreak of H1N1 virus in the Supreme Court.

The Supreme Court Bar Association President Dushyant Dave also met the Chief Justice of India and after the meeting he said that Justice Bobde is very concerned and said the government was setting up a dispensary in the Supreme Court for inoculation and vaccination.

Since the vaccination costs Rs. 1200, Dave has offered Rupees 10 lakhs as aid, as every one who visits SC - lawyers, junior lawyers, journalists, litigants etc. - may not have the resources for taking the vaccination.

Dave told that some foreign delegation members who participated in a judicial conference in the Apex Court complex recently were infected by the virus. Court hearings have been affected as the judges are falling sick. Two of the judges affected by swine influenza are on the nine-judge Constitution Bench hearing the Sabarimala verdict case, the hearing of which has been delayed as a result.