Home Legal Insiders “We Have the Constitutional Duty to Protect Human Dignity as it is as Important as the Freedom of Speech and Expression”: Justice DY Chandrachud in Sudarshan TV Show Case
Legal Insiders 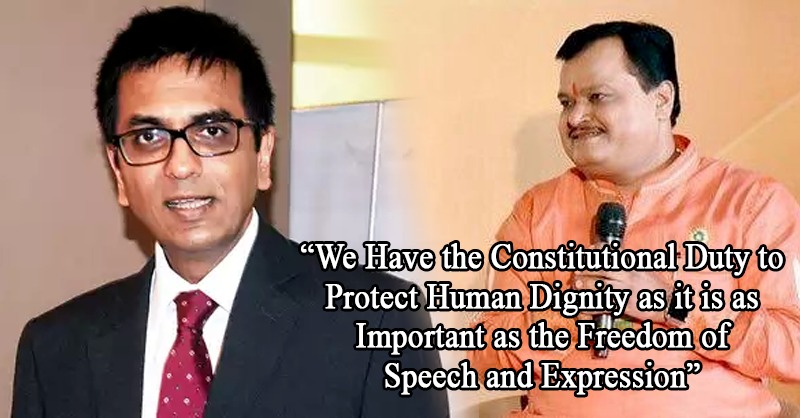 Justice DY Chandrachud was presiding in the matter of the Sudarshan TV suit. In a recent statement, the Hon’ble Justice stated that the right to human dignity is of grave importance. It is as important as freedom of speech and expression.

The Justice made this statement as he presided over the case regarding the much-debated show “Bindas Bol” which has been creating abuzz due to its controversial content. The court also opined that the show vilified the Muslim community.

While giving his statement, Justice Chandrachud further opined that “Let the marketplace of ideas flourish in India. We know what happened during the Emergency. But we have the constitutional duty to protect human dignity and that Is as important as protecting free speech.” He has also directed the channel in the current matter to file a clear affidavit. The affidavit must indicate that the channel would take good faith efforts to protect the dignity of the community in question.

The bench, which also comprised of Justices Indu Malhotra and KM Joseph stated that the show was presented in and “inciteful manner”

Chandrachud was that any community should not be represented that stereotypically. A prejudiced representation of the Muslim community, with the repeated insistence that the community has infiltrated the bureaucracy, is dangerous and needs to be addressed.

“Representation of Muslims with a beard, skull cap and green face, with frames in the background” should be considered inciteful and hurtful to the feelings of the community.

The bench did agree that the channel has been successful in raising significant questions regarding natural security. But, this cannot be done at the cost of human dignity. Investigative journalism cannot supersede human dignity. “Whenever you refer to the Civil Services, you refer to the ISI and that is a serious concern as you show it as a conspiracy by Muslims. Of course, do your investigative journalism, but can we allow such implications being made. As judges, we are also concerned about national security. But we have to protect human dignity as well”, the Bench further opined.

Stating this, the bench highlighted that it was not their intention to restrict investigative journalism. However, the journalism cannot reflect that each member of a particular community is from a terrorist organization, just because a funding member is “not above the Board”.

The bench concluded by passing an order for the channel to file an affidavit along with chalking out a plan which would state how the channel planned to strike a balance.