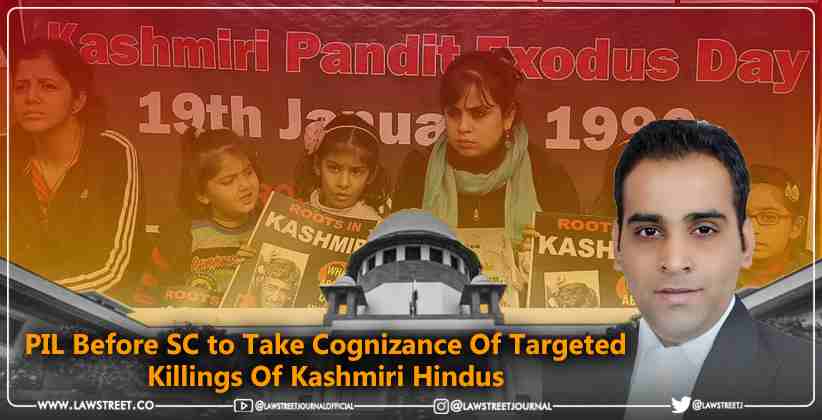 The letter petition said that,

● The Constitution of India provides right to life under article 21 which says "No person shall be deprived of his life or personal liberty except according to a procedure established by law."

● On May 31, 2022, a female hindu teacher named Rajni Bala was killed by an armed man in her school at Kulgam, Kashmir.

● This is the seventh targeted killing in May in Kashmir. Earlier three policemen and three civilians were killed by militants in targeted attacks.

● Rahul Bhat (35), a clerk under the special employment package for migrants was shut dead by Lashkar-e-Taiba terrorists at his office in the Chadoora area of central Kashmir's Budgam district on May 12.

● After the killing of Rahul Bhat several questions came as to how he was identified? Who in the office was in league with the murderers as the terrorist not only were able to enter a government office where there should have been at least some security official but also killed the only Hindu there?

● This was not the first targeted killing of rehabilitated Hindus in the valley, and neither it seems to be the last one. The chain of events of target killing of Hindus have evoked a feeling of agony, fear and insecurity among the minorities of Hindus residing in Kashmir and this incident has further added to the fears of Hindus residing in Kashmir. These killings certainly ensure the motives of the culprits to keep these Hindus in fear of death that hovers over them all the time.

● Many government employees who returned to the Valley after being given jobs under the Prime Minister's special employment scheme for Kashmiri migrants have quietly left accommodations and many of them have been demanding for transfers from Kashmir to Jammu owing to the fear of losing their lives and for the sake of their families well being.

● Such killings have created uncertainty and vulnerability among the Hindus residing in Kashmir and devoiding them from exercising their right under Article 21 by the Constitution of India.

● Several schemes initiated by the Government of India by providing opportunities to Hindus migrants of Kashmir to resettle in their native place.The objective of such schemes have been constantly defeated by these target killings as time and again such heinous incidents have been terrorizing their spirits of being a part of Kashmir.

● On 09.10.2021 a letter petition was sent to Hon’ble Court to take suo-moto cognizance on the target killings of minorities in Kashmir but since it was not taken on a serious note therefore this situation continues until now.

This is not the first time Vineet Jindal has filed a petition in the Supreme Court regarding the killings of Kashmiri Hindus. In October 2021, he also filed a plea urging the CJI to take cognizance of targeted killings of Hindus in Kashmir. In March 2022, after 'The Kashmir Files' created a debate, he wrote to the President seeking to reopen cases related to the 'massacre' of Kashmiri Pandits. Further, in April 2022, he filed a PIL before the Apex Court seeking an NIA investigation into communal clashes on Hindu festivals by stating that attacks on devotees are a threat to sovereignty.