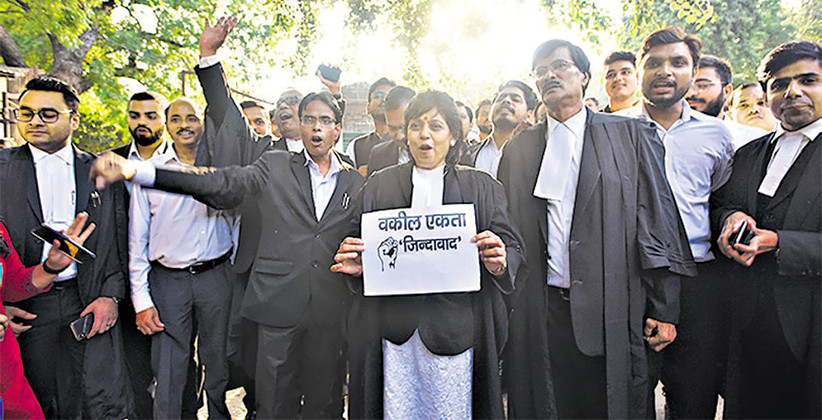 The Bar Council of India has written a letter to the Co-ordination Committee of District Bar Association of Delhi and the Bar Council of Delhi, hoping that the lawyers in the city would resume their court work from November 14, 2019.

In a letter signed by the Chairman Manan Kumar Mishra, the Council has also expressed hope that if any demonstration is to be held on November 15, 2019, it would be calm and peaceful.

"We earnestly hope that you will make all sincere endeavour to ensure that the lawyers resume court work from tomorrow itself, and, if any demonstration is to be held on 15.11.2019, it remains calm and peaceful."

As per a report published in the Business Standard, the lawyers in the city would carry out a march from India Gate to the residence of Union Home Minister Amit Shah to handover a representation to him.

Since the Tiz Hazari Violence on November 2, 2019, lawyers in Delhi have been abstaining from work.

It also reminded the lawyers of the Supreme Court's direction dated November 8, 2019, asking the BCI to take appropriate action against the lawyers on strike.

In the letter, the Council stated that it has been fully supporting the demands for immediate arrest of the guilty policemen. It has taken all possible steps right from the day of the incident upto the level of the Chief Justice of India that the suo motu cognizance of the incident was taken by the Delhi High Court on November 3, 2019.

In this regard, the BCI said that it has "failed to understand" why the advocates have not ended their resolve to abstain from work.

"We fail to understand as to how and why abstinence from Courts is continuing despite the above, and even after a resolution signed on behalf of the Bar Council of Delhi and Co-ordination Committee of District Court Bar Associations of Delhi had on 8.11.2019 for suspension of the strike. The Bar Council of India had requested for 10 days time to make efforts for the arrest of guilty police officers. We are pained to say that the litigant public and Bar Council of India were not given even one strike free day by the leaders of the Co-Ordination Committee who issued statements from 9.11.2019 itself resolving to continue the strike."

The BCI has also taken the opportunity to express its shock with respect to the application moved by the District Bar Association, Tis Hazari Courts before a Delhi Court seeking the arrest of the guilty police officials.

The Delhi High Court on November 3, 2019, has ordered a judicial inquiry into the Tis Hazari violence. The Court ordered the probe to be completed within six weeks.