Legal Insiders Jan 15, 2021 Lawstreet News Network ( ) 91 Shares
91 Shares
Pursuant to the shocking resignation of President and Senior Advocate of Supreme court Bar Association (SCBA) Dushyant Dave on 14.01.2021, there was an uproar among the legal fraternity condemning the action of the outgoing Dave. On the same day, late in the evening at 8:30 pm an urgent meeting of the of the Executive Committee of the SCBA was called via video conferencing, which was attended by:

This urgent and emergent meeting was chaired by Vice President Mr. Kailash Vasdev and was called by the Acting Hony. Secretary with the consultation of the Vice President in view of the sudden developments which took place between the last meeting of the executive committee of SCBA held on 04.12.2020.

There were 3 agendas of this urgent meeting which were as follows: AGENDA 1: To confirm the minutes of the meeting held on 4.12.2020 AGENDA 2: On physical hearing of cases by the Court AGENDA 3: Resignation tendered by Mr. Dushyant Dave as the President of SCBA.

With respect to Agenda 1, it was agreed by the majority that elections of SCBA must be held at the earliest and should be held in HYBRID form, (mix of both physical ballots and online voting) not later than third week of February 2021. It was also agreed that that since the mode of elections would be HYBRID in nature, it shall have to be supervised by the Election Committee, for which the Election Committee must be available in Delhi. The expenses and costs to hold the upcoming SCBA election shall be paid as soon as the Election Committee receives the bills from the agency chosen to conduct the elections. With respect to Agenda Number 2, (on physical hearing of cases by the Court), the members noted that all cases were not being heard and there was tremendous hardship being faced by lawyers in the hearing of cases on the virtual mode as also that there was an enormous impact on the economic condition of lawyers, the EC was of the view that the cases should be held in the actual presence of all and restoring of the optimum working of the judicial system, specially the Supreme Court would be in larger interest of all. Further, it was also requested to the Hon’ble Chief Justice to commence physical hearing of all cases preferably by 01.02.2021.  With respect to Agenda No. 3 (Resignation tendered by Mr. Dushyant Dave as the President of the SCBA), the Executive Committee accepted the decision of Mr. Dave and thanked him for his contribution and support to the bar. 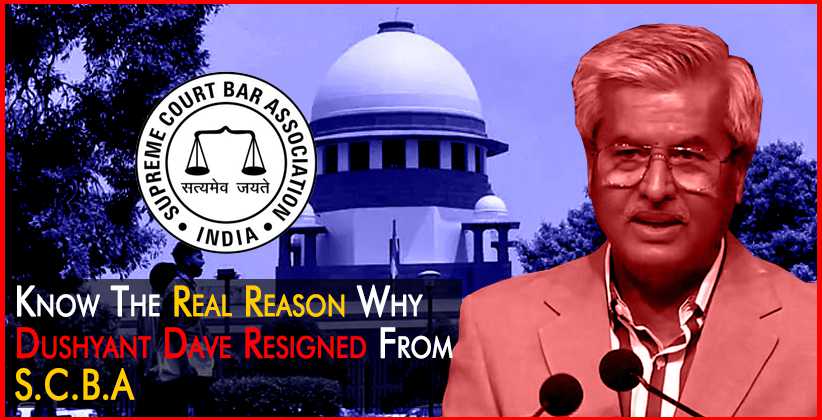 Legal Insiders Jan 14, 2021 Lawstreet News Network ( ) 242 Shares
242 Shares
On Thursday, President of Supreme Court Bar Association (SCBA) and Senior Advocate Dushyant Dave resigned from his post with immediate effect.In his letter he stated that “following recent events, I feel that I have forfeited my right to continue as your Leader and so I hereby tender my resignation from the post of the President of the SCBA with immediate effect.”He further stated that, “Our term has already come to an end. We sincerely decided to hold virtual elections to elect a new...
Read full post