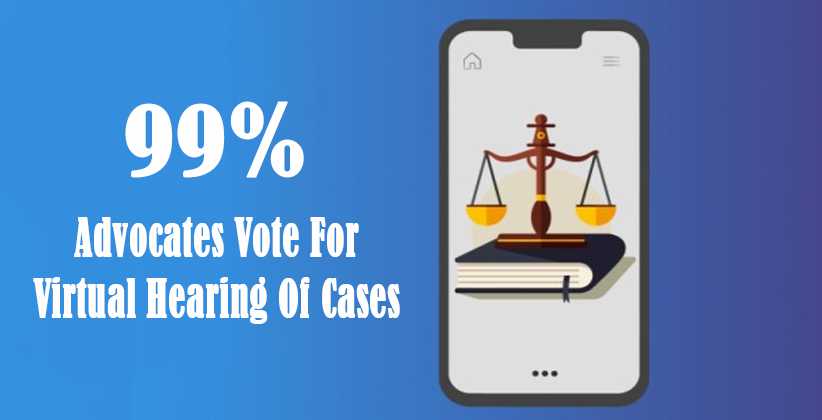 The Supreme Court of India deferring to the demands of bar association leaders has planned to start limited physical hearing of cases on a trial basis from this week, but the move appears to be fizzled out as a measly 0.87% of advocates agreed for the physical hearing of the cases whereas 99% want the virtual hearing. The medical experts have also advised a wait and watch policy before starting physical hearing due to the increase in the number of patients of COVID-19 infection in the country.

On the other hand, the judges' committee comprising Justices N V Ramana, Arun Mishra, R F Nariman, U U Lalit, A M Khanwilkar, D Y Chandrachud, and L N Rao had suggested opening three courtrooms for the physical hearing of cases and giving entry only to the arguing counsel. Also, there were several instances when Supreme Court Bar Association president Dushyant Dave and SC Advocate-On-Record Association president Shivaji Jadav have strongly urged along with other respected advocates of the Supreme Court, for physical hearing in the apex court in their meeting with the committee of seven judges.

After interacting with Bar Council of India chairman Manan Kumar Mishra, Dave, and Jadhav and consulting with the topmost medical experts of India the judges' committee recommended a hybrid system that would include the opening of three courtrooms with all necessary precautions for the physical hearing of old cases and continuing virtual hearing for the new cases, but on the other hand, a large number of advocate-on-record signed a memorandum opposing start of physical hearings. Supreme Court started the virtual hearings on 25th March 2020 after the outbreak of the coronavirus.

Parihar also said “When physical hearing of cases can be allowed at Allahabad High Court why can’t it be permitted in Lucknow? We have a sprawling campus where social distancing can be easily maintained”. The Lucknow High Court Lawyers have complained about poor internet connectivity in the failure of virtual hearings.

On the other hand, the Patna High Court adopted a procedure to determine the physical hearing of cases. They issued notices to advocate general, associations of advocates, the bar, and lawyers to seek their view. All lawyers were of the opinion that for now the hearing should be conducted virtually. The HC will hear the matter again on 2nd September 2020.