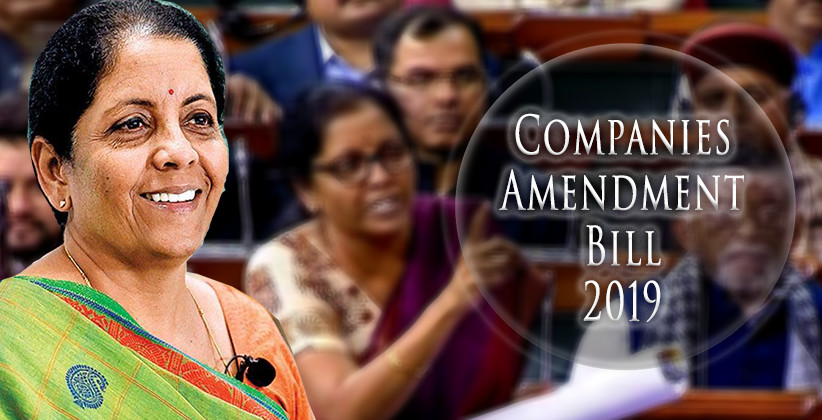 Speaking about the Bill, Union Minister of Finance and Corporate Affairs Nirmala Sitharaman said that the Bill containing 44 clauses is being brought in to “ensure more accountability and better enforcement to strengthen the corporate norms and compliance management in corporate sector.”

The Bill also seeks to replace the Ordinance promulgated in February 2019, will keep a check of ‘shell companies’ and will promote ‘ease of doing business’, added Sitharaman.

Opposing the ordinance brought earlier, Adhir Ranjan Chowdhury (Cong) and Saugata Roy (TMC) said it was not required as the law has been amended on several occasions.

Pinaki Misra (BJD) described the bill as "disastrous", saying the legislation has been drafted by bureaucrats and the lawmakers have just rubberstamped it.

A Raja (DMK) said the registrar of companies has been given "excessive powers" which is not good. PP Chaudhury (BJP) said once the law is amended, it will help in ease of doing business and give a boost to commerce.

Salient features of the amendment:

In case of proven misconduct, the Bill provides for debarment from appointment as an auditor or internal auditor of a company, or performing a company’s valuation, for a term between 6 months to 10 years.

Under section 164, a new clause has been inserted to state that violation of Section 165(1) shall be a ground for disqualification of a director, if he/she breaches the limits of maximum directorship allowed thereunder.

Amendments have been proposed to Section 135 to carry forward the unspent corporate social responsibility amount, to a special account to be spent within three financial years and transfer to the Fund specified in Schedule VII, such as PM’s National Relief Fund.

Newly proposed Section 10A makes it mandatory for new companies to file a declaration with the concerned Registrar within 180 days of date of incorporation that every subscriber to the memorandum has paid the value of the shares agreed to be taken by him on the date of making such declaration.  Non-filing of such declaration can be a ground for removal of the company from the register of companies on grounds of non-commencement of business.

Clause 36 of the Bill seeks to amend sub-section (1) of Section 248 of the Act to insert new clauses (d) and (e) enabling the Registrar to send notice to companies and its directors informing them of his intention to remove the name of the company from the registrar of companies in case the subscribers to the memorandum fail to pay the subscription which they had undertaken to pay or the company does not carry any business/operation anymore or the company fails to file the declaration under Section 10A.

The Bill proposed to add a proviso to Section 2 to permit companies which are subsidiaries or associates of foreign companies that follow a different financial year for accounting outside India to follow any period as its financial year.

Recategorization from “Fine” to “Penalty”

As many as 16 sections have been amended whereby the punishment for non-compliance to be levied under the existing Act is re-categorized from ‘Fine’ to ‘Penalty’. In general words, ‘fine’ is imposed when any application/petition is filed with any court (like NCLT, High Court) whereas ‘Penalty’ can be imposed in case of non-compliance by the company whereby the authority (like Registrar of Companies and Regional Directors) can directly impose penalty on company. Thus, Registrar of Company and Regional Director can now impose penalties directly after issuing show-cause notice, instead of going to judiciary to get fines imposed.