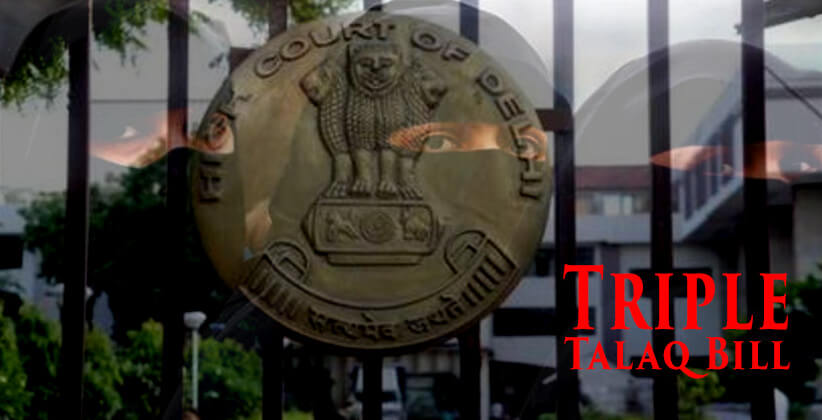 A Public Interest Litigation (PIL) has been filed in the Delhi High Court seeking to quash Sections 4 and 7 of the newly passed The Muslim Women (Protection of Rights on Marriage) Act, 2019, which criminalises instant 'triple talaq' among Muslims and attracts a jail term of three years for the husband.

Under Section 4 of the Act, a man who gives 'triple-talaq' to his wife is liable for imprisonment of three years.

The petition filed by social activist Shahid Ali stated that the Supreme Court had limited its judgment up to the declaration of triple divorce as unconstitutional and invalid, however, the government went many steps further and not only declared the pronouncement of Triple Talaq as void and illegal but also made the same a criminal offence.

Further, the petition states that the Act makes no arrangement for reconciliation between the Muslim husband pronouncing the Triple Talaq and his wife.

"The mere fact of not providing any measure for reconciliation between the Muslim husband pronouncing Talaq and his wife is ultra-vires to own statement of objects and reasons attached with the Act and also violative of the order of the apex court," the plea said.

The litigant further stated that the present Act discriminates against Muslims also on the ground that instances of desertions would increase.

"In Indian society most of the aggrieved Hindu husbands on account of tough procedure of divorce, prefer to desert their wives and since desertion is no offence, therefore, they avoid the unhappy marriages, however, the Muslim husbands cannot desert their wives and also cannot go in adultery on account of commandment of Quran, therefore, it is submitted that the present Act will result in discrimination against Muslims," it read.

The High Court is likely to hear the plea next week.