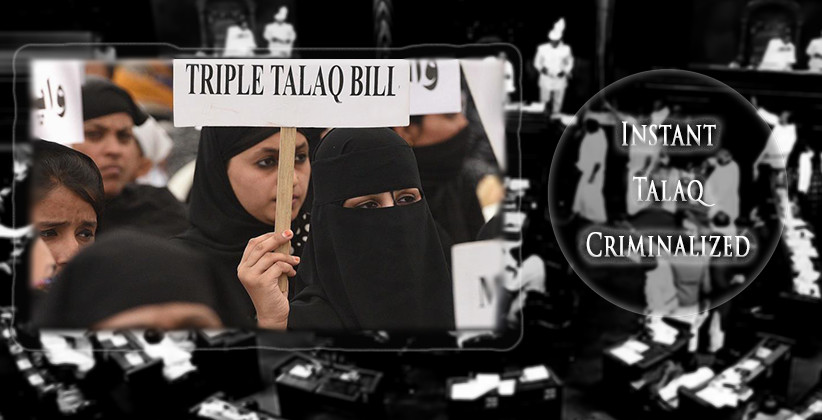 The Muslim Women (Protection of Rights on Marriage) Bill 2019 was passed by a voice vote after the Congress, the Trinamool Congress and Janata Dal (United), among other Opposition parties staged a walkout.

The bill, which will now be sent to the Rajya Sabha, makes the practice of triple talaq, wherein a Muslim man can divorce his wife by uttering the word talaq thrice in succession – a cognizable offence, attracting up to three years’ imprisonment and a fine. A cognizable offence is one in which the police may carry out an arrest without a warrant, and is used for serious crimes such as theft, rape and murder.

The Opposition demanded that the bill be referred to a parliamentary panel for review as it criminalized a civil right issue.

The bill allows the wife or her relatives to file a complaint, and has a provision for a magistrate to grant bail to the accused. The bill also leaves the scope for reconciliation between the couple.

NK Premachandran of the Revolutionary Socialist Party, leading the Opposition charge, said that provisions to protect women already existed in form of the Domestic Violence Act and Section 498A of the Indian Penal Code, which penalized cruelty against a woman in her marital home. He alleged that the bill was discriminatory, because divorce among other faiths is regulated by personal laws and was not a criminal offence.

Rajiv Ranjan Singh, a member of the Janata Dal (United), raised several objections to the bill, one of them being the burden of proof, asking, "If a man said it to his wife, when the case goes to court and the man denies having said it, how will you prove it?"

This was also one of the issues raised by AIMIM chief Asaduddin Owaisi. "You will put the burden of proof on the wife. Who from the husband's side of the family is going to come and testify against him in court?" he asked.

Owaisi listed several other objections to the bill, which he described as "anti-women". "You will jail the husband without telling us how will he provide maintenance to the wife. Also, this woman will be bound to this man till he serves his three-year-long sentence. Why should a woman spend three years of her life waiting for a convicted man to get out of jail? This law is against criminal jurisprudence," he said.

The Union Law Minister Ravi Shankar Prasad said, “The Indian Constitution is equal for all daughters. So, the bill is needed.” Prasad pointed out that despite a 2017 Supreme Court ruling which struck down the practice and found it unconstitutional, hundreds of cases have been reported since then.

“When Hindus and Muslims are jailed under the dowry law [Dowry Prohibition Act] or the Domestic Violence Act, no one objects. What is the objection in penalising the practice? It is needed to provide gender justice and equality,” Prasad added.

Prasad and other Bharatiya Janata Party (BJP) parliamentarians, including Meenakshi Lekhi and Kirron Kher, emphasized that the bill was about gender justice. “The idea that religious law is immutable, this thinking needs to change,” Lekhi said, adding that no area could lie outside the Constitution.

Many social evils among Hindus in the country, such as ‘sati’ - an outlawed practice of widow-burning on the funeral pyre of the husband were penalized, Prasad said, and added that such laws acted as deterrents.

Prasad said that 20 Islamic countries including Pakistan, Afghanistan, Malaysia, Indonesia, Jordan, Egypt and Tunisia had outlawed triple talaq. “And if they could do it, why cannot it be done in India which is a secular country?” the minister asked.

However, members of the Opposition, including Congress’ Gaurav Gogoi pointed out that among all the countries that outlawed the practice, only one (Bangladesh) criminalized it.

In the famous case of Shayara Bano v. Union of India and Others case (2017), a five-judge bench of the Supreme Court held in a 3-2 majority verdict that instant triple talaq, polygamy and nikah halala (in which a woman must marry and divorce another man to re-marry her first husband) were unconstitutional practices.