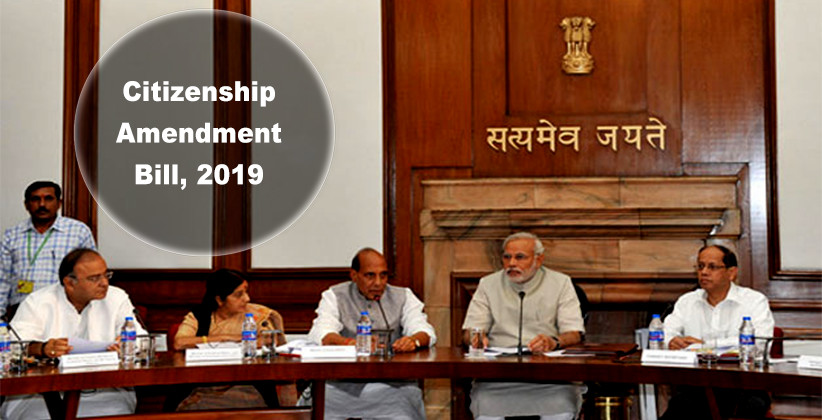 The Union Cabinet cleared the Citizenship Amendment Bill, 2019 for reintroduction in the Parliament in the Winter Session on Wednesday (December 4, 2019). The bill seeks to amend the Citizenship Act of 1955 to ease the process of acquiring citizenship in India for its non-Muslim immigrants coming from three neighbouring countries having a Muslim majority namely Pakistan, Afghanistan and Bangladesh.

The rationale given for the justification of this categorization is the religion-based persecution of the non-Muslim minorities (like the Hindus, Buddhists, Jains, Christians and Parsis) in the foreign nations comprising of a Muslim majority.

This bill was formerly passed by the Lok Sabha on January 8, 2019 but was pending in the Rajya Sabha, when it lapsed due to the subsequent dissolution of the Lok Sabha before the General Elections of 2019.

One of the major reasons for the pendency of the bill was large-scale protests going on in Assam alleging arbitrary action and violation of Article 14 or the Right to Equality on the part of the Government since granting citizenship to countless illegal Bangladeshi immigrants in Assam might lead to tension in the indigenous communities of the State largely due to speculations about loss of livelihood. Legitimizing the stay in the country of illegal immigrants might disturb the local demographics of Assam, reports say.

Now the real question is whether the introduction of this billis a blatant attack on the integrity of the Muslim Community or a genuine action inspired by a concern for the Bangladeshi immigrants? If the concerns of the Government are genuine, is the reason for this classification of immigrants based on religion, justified according to the laws of the land? Linking citizenship with religious identity is not permissible as per the constitution of the country.