All you need to know about the Doctrine of Election 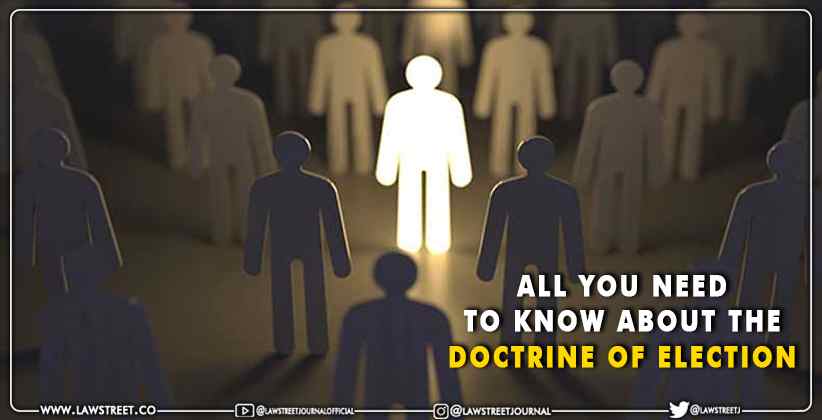 Section 35 of the Transfer of Property Act, 1882 incorporates the Doctrine of election alongside Section 180-190 of the Indian Succession Act 1925. Election simply means choosing between two alternative rights or inconsistent rights. Under any instrument if two rights are conferred on a person in such a manner that one right is in lieu of the other, he is bound to elect only one of them. One cannot take under and against the same instrument.

Principle Underlying the Doctrine of Election

Allegans contraria non est audiendus : he is not to be heard who alleges things contradictory to each other.

In Cooper v. Cooper, Lord Hather explained the principle underlying the doctrine of election in the following words, “…there is an obligation on him who takes benefit under a will or other instrument to give full effect to the instrument under which he takes benefit ; and if it is found out that instrument purports to deal with something which it was beyond the power of the donor to dispose of , but to which effect can be given by the concurrence of him who receives a benefit under the same instrument, the law will impose on him who takes the benefit the obligation of carrying the instrument into full and complete force and effect .”

Where a person professes to transfer property which he has no right to transfer, and as part of the same transaction confers any benefit on the owner of the property, such owner must elect either to confirm such transfer or to dissent from it; and in the latter case he shall relinquish benefit so conferred, and the benefit so relinquished shall revert to the transferor or his representative as if it had not been disposed of, subject nevertheless, where the transfer is gratuitous, and the transferor has, before the election, died or otherwise become incapable of making a fresh transfer, and in all cases where the transfer is for consideration, to the charge of making good to the disappointed transferee the amount or value of the property attempted to be transferred to him. The rule in the first paragraph of this section applies whether the transferor does or does not believe that which he professes to transfer to be his own. A person taking no benefit directly under a transaction, but deriving a benefit under it indirectly, need not elect. A person who in his own capacity takes a benefit under the transaction may in another dissent there from.

Election over a property is not asked to made by a person unless he holds a proprietary interest which are disposed off in derogation of the person’s rights. So, election cannot take place if the property that is decided by the transferor to be disposed does not happen to be owned by any individual to whom an interest is being provided through the transfer. Also, it cannot take place if the transferor does not provide any benefit on the individual who is the original owner of the property.

Exception to the last preceding four rules–Where a particular benefit is expressed to be conferred on the owner of the property which the transferor professes to transfer, and such benefit is expressed to be in lieu of that property, if such owner claims the property, he must relinquish the particular benefit, but he is not bound to relinquish any other benefit conferred upon him by the same transaction.

Acceptance of the benefit by the person on whom it is conferred constitutes an election by him to confirm the transfer, if he is aware of his duty to elect and of those circumstances which would influence the judgment of a reasonable man in making an election, or if he waives enquiry into the circumstances. Such knowledge or waiver shall, in the absence of evidence to the contrary, be presumed, if the person on whom the benefit has been conferred has enjoyed it for two years without doing any act to express dissent. Such knowledge of waiver may be inferred from any act of his which renders it impossible to place the persons interested in the property professed to be transferred in the same condition as if such act had not been done.

If he does not within one year after the date of the transfer signify to the transferor or his representatives his intention to confirm or to dissent from the transfer, the transferor or his representative may, upon the expiration of that period, require him to make his election; and, if he does not comply with such requisition within a reasonable time after he has received it, he shall be deemed to have elected to confirm the transfer. In case of disability, the election shall be postponed until the disability ceases, or until the election is made by some competent authority.

Estimated cost of the property which is attempted to be transferred towards the transferee is the approximation of the compensation that he shall receive. However, in context of immovable properties, there arises the issue of changing value of the property according to the lapse of time. Thus, this valuation is to take place at the date of the instrument becoming operational rather than at the time of election

Section 35 of the Transfer of Property Ac, 1882 explains the concept of the Doctrine of Election. This project tries to deal with the various nuances involved in the doctrine through the usage of various landmark judgments. Herein, special emphasis has been placed upon providing a clear understanding of the conditions necessary for the election by the original owner to take place. The differences between the Indian Law perspective as well as the English Law perspective is brought out through critical analysis of the provisions i.e.  Principle of forfeiture and Principle of compensation. Various aspects such as Proprietary Interest, Compensation estimated, indirect benefit, the intention of the donor etc have been dealt and explained for the enhanced understanding over the model of Doctrine of Election.

Doctrine of ElectionTransfer of Property

'Petitioner Needs To Show Police Certificate To Claim Pension Of Husband Who Is Dead Under EPF Scheme': Madras High Court