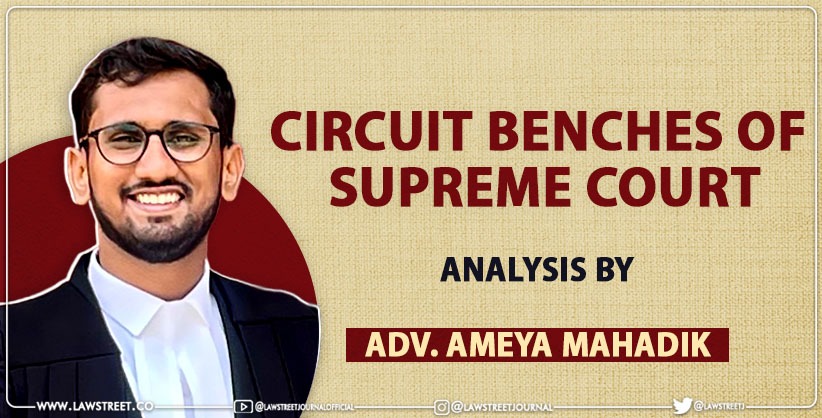 The Draft Article 108A moved by Ambedkar read as follows: “The Supreme Court shall sit in Delhi or at such other place or places, as the Chief Justice of India may, with the approval of the President, from time to time, appoint.”

Dr. Ambedkar's amendment can be interpreted to mean that so long as the Supreme Court sits in Delhi, it will not have the right or the privilege to hold a circuit court anywhere else in the country. From this, it is implicit that the idea of circuit benches are is not new.

In 1986, the Supreme Court, in a judgment,[1] observed that it was 'desirable to set up a National Court of Appeal which would be in a position to entertain appeals by special leave from the decisions of the High Courts and the Tribunals in the country in civil, criminal, revenue and labour cases and so far as the present apex court is concerned, it should concern itself only with entertaining cases, involving questions of constitutional law and public law.'

As per the latest 'statistics' released by the Supreme Court, there are 69,956 matters pending before it. Most of these matters are appeals filed against the judgments and orders of various High Courts and Tribunals. Among this 446 are Constitution Bench matters. One nine judge bench matter is pending since 2002.[1] Formation of regional benches spread out throughout the country would helping reducing the pendency of cases before the Hon’ble SC.

Most recent developments in international arena: Recently in 2014, Ireland established a new Court of Appeal whose chief function was to hear appeals from the high court and circuit court.

To summarize, the pros are as follows:

Other arguments in favour:

The Court reiterated its stance taken in previous decisions in the case of Mathai v. Joby George, wherein the view was that Supreme Court, under Article 136, was not simply a regular court of appeal.[6] The jurisdiction of the Supreme Court under Article 136 is discretionary, and there is no vested right of appeal to a party in litigation. The Court analyzed concerns primarily pertaining to speedy disposal of cases to ensure efficient justice were raised.

During the analysis of the Constitutional feasibility of the National Court of Appeal, in Vasanthakumar, the Supreme Court took into consideration the arguments of Senior Advocate, KK Venugopal which were in favour of the creation of a National Court of Appeal.[7] One of his arguments was centered around the premise that, in Ireland, a separate Court of Appeal had been set up to deal with the problem of over-burdening of cases with the Supreme Court and to mete out the expedient disposal of cases for the efficient delivery of justice.[8]

OPINION OF AUTHORS OF ARTICLES

“while it is known a successful working system of a Regional or National Court of Appeal would be complex and would require utmost precariousness in its initial years, it can be certain that it would go a long way in solving the problems of over-burdening of cases at the Supreme Court level due to what has recently been described by eminent jurists such as K.K. Venugopal, as a lack of caution exercised by the Supreme Court in allowing appeals from Article 136. Moreover, this would also enable people from different corners of India to avail the justice that it enshrined by the Constitution in a speedy and efficient manner.”[9]

The Author is an advocate practicing in the Supreme Court of India. The views expressed are personal to the author.