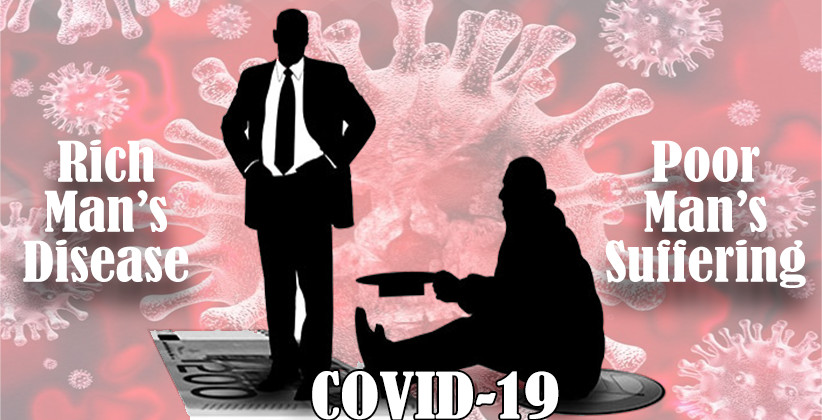 The entire advent of pandemic lies at the emergence from a popular animal market in Wuhan. It has been speculated that its origin is either through a bat or an illegally trafficked scaly animal called pangolin.

The danger does not lie for people who can afford sedentary lifestyle but lies for the people who have to work. Living in a country that has a dense population and gaping inequities, the virus is set to hit communities different. Focusing on the 92 million households that live in one room homes, social distancing is a theoretical concept here. The unprecedented lockdown has affected millions who are forcibly made to flee cities and walk hundreds of kilometres to their native villages. Most of them have no savings to fall back on amid this crisis.

The ones who eat wildlife animals are a small minority and usually belong to a rich class. The amendments to the Wildlife Protection Law of 1989 that were needed to be enacted in order to absolutely prohibit the hunting, killing, selling and purchasing of the rare and endangered species of animals has not been adhered to and has now resulted in this pandemic.

The spread resulted in India and was brought in India by the country's elites and the upper middle class.

Starting from the first case of a Kerala resident returning from Wuhan, China to Bollywood singer Kanika Kapoor who slipped through the screening spots after returning from UK and further joined the politicians at various social events over the next few days thus widening the spread.

The likes of Kanika Kapoor are not the only ones responsible, several political leaders who had to follow the norms did not do so. Further to which, the government neither cancelled the tour of USA President Donald Trump irrespective of the fact that the outbreak was already raging globally.

The elites never cancelled their parties and abandoned their travel plans to keep themselves quarantined at homes.

Let's look at the cases wherein the coronavirus spread reached a level further through the upper middle class and rich societies :

"Thousands of migrants workers have been forced to leave their rented homes as they are unable to pay rent. It is important that the government intervenes and provides them money for their rent immediately," opposition leader Rahul Gandhi said in a letter to Narendra Modi

If the virus hits the below poverty line regime, curbing the spread will be a very difficult situation something that the current government is not equipped to handle.

Further to which here are several celebrities around the world who stand affected by the pandemic :

The Government officials who tested positive for coronavirus :

In India, many celebrities and politicians have self-isolated themselves including the people who were present at the social event organised by the President Ram Nath Kovind wherein Kanika Kapoor was present as well. Anupam Kher and Shabana Azmi have isolated themselves upon their return from abroad.

[COVID-19] Non-Payment Of Electricity Bill Will Not Result In Any Power Connection Cut Till 14th April: Tamil Nadu Government