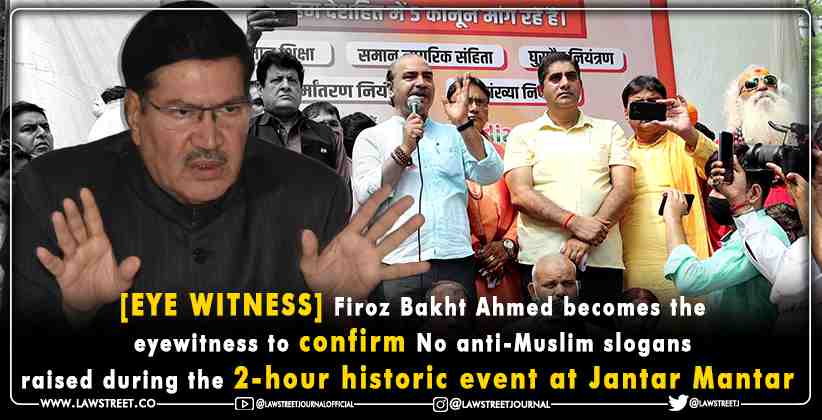 Firoz Bakht Ahmed, Chancellor of Maulana Azad National Urdu University and the grand nephew of Maulana Azad (the first Education Minister of India), has come forward to speak up against the false allegations put on Ashwini Upadhyay for inciting inflammatory slogans at the 8th August event at Jantar Mantar. He said no anti-Muslim or any other sloganeering was heard during 10 am to 11:50 am for the time that he was at the protest.

A historic event to celebrate the anniversary of Quit India Movement received false allegations of promoting anti-Muslim sloganeering. A video surfaced on twitter and other social media platform containing inflammatory slogans. However, these videos were made after the event had wrapped up and Advocate Ashwini Upadhyay had nothing to do with it. Mr. Upadhyay told the ABP News that he invited only 50 participants and wrapped up the event at 12:00 pm after crowd of people started gathering. He also said that he had no connection with the person(s) in the video; they were neither invited nor associated with the event.

Firoz Bakht Ahmed, the Chancellor of Maulana Azad National Urdu University, has confirmed that he was present at the event between 10 a.m. to 11:50 a.m. During this time, he said, no anti-Muslim or any other sloganeering was heard or said. He also went on to say “Mr. Upadhyay is a well-meaning BJP leader, he had no connect with any radicalized anti-social or communally conflagrant person as per my assessment.”

The event was held to celebrate the anniversary of Quit India Movement and demand abolition of colonial-era laws. “These laws were made by British not to give justice to Indians but to strengthen their own power,” said Mr. Upadhyay.