Home Speak Legal Is Marital Rape an offence after the judgment on Right to Privacy?
Speak Legal 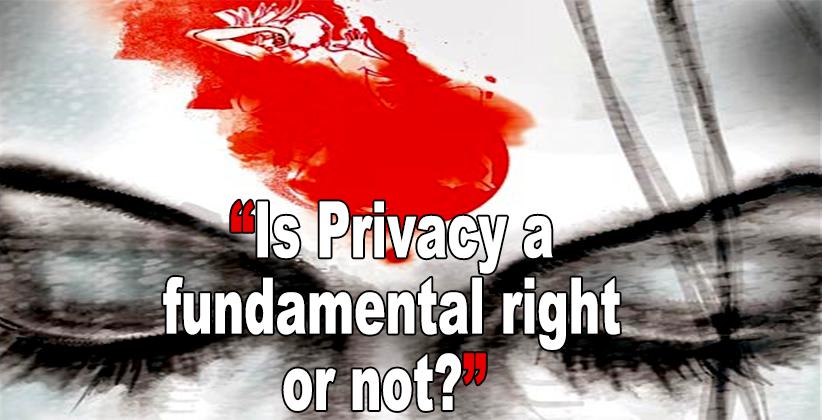 In 2018, a nine judge’s bench gave a judgment, “is Privacy a fundamental right or not?” to which the bench accepted, privacy is a fundamental right under the Article 19 & 21 of Indian Constitution. A challenge was presented for constitutional interpretation, and understanding the term of privacy which means, allowing each human to be alone in the society is impregnable. The privacy of an individual depends upon, how his or her relationship with the society is. Although, the eight & six judge’s bench had given a verdict in M P Sharma v Satish Chandra, District Magistrate, Delhi & Kharak Singh v State of Uttar Pradesh (“Kharak Singh”) rendered respectively that Indian Constitution doesn’t protect the privacy of an individual. Justice Subba Rao did mention that Article 21 of Indian Constitution does typify right of an individual from free from restrictions and encroachment, but it hasn’t declared a right to privacy as a fundamental right. This privacy has given protection to the LGBTQ+ community, allowed any individual to consume whatever they feel like to eat inside their home. Whereas, there is a dire problem for women, who are cohabiting with their matrimonial family and confronting with domestic violence and sexual harassment inside the four corners of the wall.

Whereas, the bench of KJ Shetty & A.Ahmadi gave an order in the year 1990, the State of Maharashtra and Another vs. Madhukar Narayan. On November 13th, 1965 between 8:15 and 8:45 pm, the police inspector ostensibly entered inside a hut in which Banubi, w/o Babu Sheikh used to stay with her family. He wanted to have sexual intercourse with her, and to which she resisted and shouted for help. When a complaint was reported by the people, then they came in a police jeep. They found police inspector standing at some distance in uniform from the hutment, and ordered the policemen to take Banubi to the police station as she abused him. An enquiry was made against the police inspector Madhukar Narayan, and it was made upon the complaint registered by Banubi about the incident to the District Superintendent of Police, and Police Inspector was charge-sheeted. Later, there was a conclusive report of the said proceedings submitted by the inquiry officer, the charges which were proved & recommended dismissal of the inspector. The respondent filed a case in The Bombay High Court, against the said removal of him from the department of police. He stated that he went to hutment of Banubi on getting information that she was dealing in illegal liquor, and report of the department had mentioned that Banubi had an extramarital affair with many guys, and she was an itinerant. During the investigation, when she got to see illegal liquor being found that made her upset and filed a false complaint against the police Inspector. In the verdict made by the high court had observed that Banubi is an unchaste woman and it would be unsafe to allow the fortune and government official career cannot be kept in jeopardy, with a complaint made by a woman with illicit relation with a different person. A woman with easy virtue has a right to entitle privacy, and no one can invade that, and judgment was given by The Supreme Court of India to remove the inspector form the service as passed by the appellate authority and direct, and it was given under the law.

Why a woman being a wife doesn’t have a right to file a complaint against her husband, and the action is adversely protecting wrongful act within the room by the privacy judgment & absence of laws to penalize forceful sexual intercourse with her. Section 375 of IPC, 1860 provides that a man is said to commit rape when he penetrates his penis to any extent into the vagina of a woman. How far it has gone inside the vagina is immaterial. Even sparsest insertion of the penis by a man into the vagina of a woman amounts to rape.

Marital Rape introduces as an undesirable sexual intercourse by a man with his wife which is performed by an illicit strength, the intimidation of restraint, or corporal brutality, or when she is incapable to give her consent to such sexual intercourse.

The views, thoughts and opinions expressed in the text belong solely to the author and do not necessarily reflect the opinion of LawStreet Journal.