Home Speak Legal Agreement Between The Governments Of India And Pakistan Regarding Securities And Rights Of Minorities: Nehru-Liaquat Agreement
Speak Legal 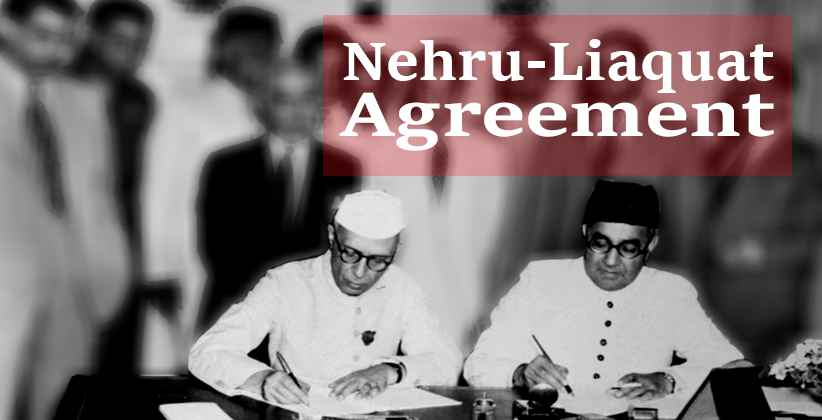 Following the Partition of India, massive communal rioting had ensued in the Punjab province and near-total exchange of population took place, but in East and West Bengal there were no immediate violence. At the start of 1950, after rioting in Kolkata, the communal violence spread in East Pakistan (earlier East Bengal) and it resulted in exchange of population in Bengal. To pacify the sentiments of minorities, on 2nd April the then PM of Pakistan Liaquat Ali Khan came to Delhi and Nehru-Liaquat agreement also known as the Delhi Pact between two countries was signed on 8th April, 1950 at New Delhi by the then PM of India Jawahar Lal Nehru and Liaquat Ali after six days of long deliberations. Under this agreement, refugees were to be allowed to return to their original country for disposal of property, abducted women and looted property were to be returned, forced conversion were not to be recognised and rights of the minorities were to be affirmed so as to avert another war between them. It was touted as “a bill of rights for minority communities”.

Following the pact, minority commissions were established in the two countries to implement these terms of Nehru-Liaquat pact. This measure led to restoration of confidence. Rioting stopped in Kolkata and as a temporary relief net migration of Hindus into West Bengal also slowed down.

The first paragraph of the act summarises the intention of both the countries;

“The Governments of India and Pakistan solemnly agree that each shall ensure, to the minorities throughout its territory, complete equality of citizenship, irrespective of religion, a full sense of security in respect of life, culture, property and personal honour, freedom of movement within each country and freedom of occupation, speech and worship, subject to law and morality. Members of the minorities shall have equal opportunity with members of the majority community to participate in the public life of their country, to hold political or other office, and to serve in their country’s civil and armed forces. Both Governments declare these rights to be fundamental and undertake to enforce them effectively. The Prime Minister of India has drawn attention to the fact that these rights are guaranteed to all minorities in India by its Constitution. The Prime Minister of Pakistan has pointed out that similar provision exists in the Objectives Resolution adopted by the Constituent Assembly of Pakistan. It is the policy of both Governments that the enjoyment of these democratic rights shall be assured to all their nationals without distinction.”

It further says that “Both Governments wish to emphasise that the allegiance and loyalty of the minorities is to the State of which they are citizens, and that it is to the Government of their own State that they should look for the redress of their grievances.”

Amit Shah has while defending the Citizenship Amendment Bill, 2019 in Parliament has repeatedly said that, India has upheld its obligation under the Delhi Pact, but Pakistan has failed to do it and had it followed the spirit of the pact, India would not have to bring this bill.

It is debatable issue whether Nehru-Liaquat pact has achieved its stated objectives or not as the exodus of Hindus from then East Pakistan continued in milder manner and practically it still continues.

But one thing is definite that the Supreme Court is going to examine the relevance of the Delhi Pact while considering the constitutional challenge posed by the Citizenship (Amendment) Act, 2019.