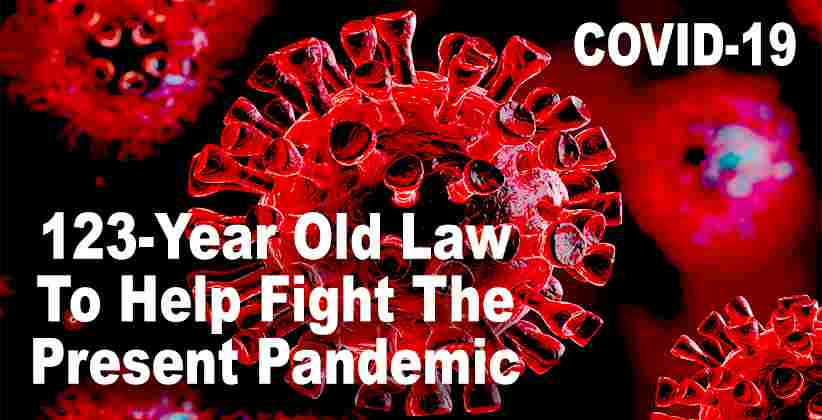 Many states of India have decided to invoke an old instrument in response to the COVID-19 pandemic. It is the Epidemic Disease Act, 1897 which is 123 years old, which is a two-page law remains unchanged.

Fun Fact: The Epidemic Disease Act, 1897 is one of the shortest legislation with only four sections.

To control the pandemic of 2020, the law which is used now was formulated even when people even hadn’t started to use radio-sets and vitamin supplements weren’t available for consumption.

In the year 1896, there was an outbreak of the bubonic plague epidemic in the province of Bombay. As the case has been with the epidemic, there was chaos and scapegoating in major parts of the societal area. It was after four months when the plague was identified in Bombay and Queen Victoria addressed to both the House of Parliament in the United Kingdom, in which she said, “directed [her] Government to take the most stringent measures at their disposal for the eradication of the pestilence.” The stringent measures were eventually taken by the administrative authorities in light of the Epidemic Diseases Act, 1897.

The Bill was introduced after the address of Queen Victoria in the Council of the Governor-General of India in Kolkata with an interest to restrict the spread of dangerous epidemic disease. The power which has been mentioned in the bill is extraordinary and necessary, as the people will have to trust the discretion of the executive in the grave and critical circumstances.

Another member in the Council had said that measures have been taken for the welfare of people and it was maintained by the Government that the vague wording has been used to benefit the local bodies that could potentially support in particular conditions.

The Act contains an authoritarian streak to it which starts from the beginning with a line, “the public must trust the discretion of the government” – and second, in terms of the wide-ranging and almost unlimited powers, it conferred on local authorities.

Earlier, the plague treatment was done through isolation of affected persons, cleansing houses, destroying or disinfecting clothes and rigorously screening for the signs of the plague. A May 1897 memorandum from some people of Poona against Rand’s Plague Committee enumerated some of the excesses: “rough and ready methods used by the troops who carried off to hospitals not only patients, but even their relatives and passers-by; the indignity of public stripping of men and women for inspec­tion; the disregard of social and religious susceptibilities; the forcible opening of houses and business premises, and the wanton destruction of property.”

It was noted in the Indian Journal of Medical Ethics that, “The Act emphasises the power of the government but is silent on the rights of citizens.”

[COVID-19]: SC Directs States To Set Up Panel To Consider Release Of Prisoners On Parole