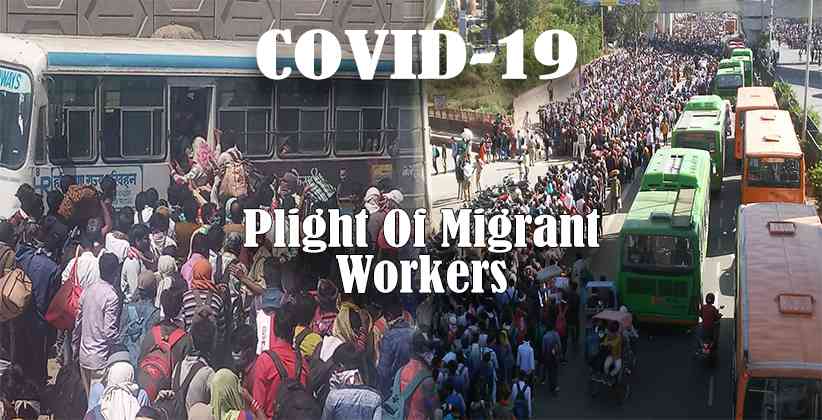 It is an hour of reckoning as many among us who are sitting on the couches of our house do not even realize what is the plight of thousands of stranded workers longing on the roads and bus stands trying to find out their way home. The scenes at Lal Kuan bus stand in Ghaziabad and Kaushambi bus stand were disheartening due to lockdown announced a few days back.

It was a weekend and workers were seen crying in distress as they could not reach their homes as all modes of transportation were suspended. Few buses which were allowed to operate for transit were provided by the UP government. They were jam-packed with the workers, some even sitting at the top of the bus. Few who chose to walk their way home even died on the way.

The Minister of Railways and Commerce & Industry Shri Piyush Goyal exhorted manufacturing, industry and trading associations to retain the workers and laborers on the payroll and at the same place. He said that their movement will jeopardize the nationwide lockdown, and also affect the early normalization in the post-COVID period. In order to help states take relief steps for migrant workers, the Centre authorized State Governments to utilize State Disaster Response Fund (SDRF). They were also advised to set up Relief Camps along Highways, to provide food and shelter to migrant workers returning to their domicile States.

States like Maharashtra, Bihar and Rajasthan took steps and showed willingness to help the migrant workers by providing food, shelter homes and arranging buses. It was also necessary to sanitize the buses as they could be potential carriers of Corona virus even if a single infected patient travelled in the bus during inter-state transit. As it was witnessed that the workers even set out on foot to reach their homes, the state governments planned to set up relief camps on state and district borders. For instance, Bihar CM set up camps in districts in his state that share common borders with adjoining states like Uttar Pradesh and Jharkhand, and also Nepal.

It is rather saddening to see the Supmeme Court’s prompt response to plea for evacuation of 850 pilgrims from Iran and issuing of notices even before looking at what exactly was the turmoil going on inside the country related to migrant workers.

Nonetheless, the Supreme court reacted and issued direction to the Centre to ensure accessibility of basic necessities & medical facilities for migrant workers in view of the nationwide lockdown.

On behalf of the government, Solicitor General of India Tushar Mehta assured that necessary steps were being taken to send them to shelter homes instead of letting them flee to their villages located far away in states like Bihar or UP.

Other high courts including Bombay High Court issued a direction to make efforts to help the workers and, the court said, “This is apart from the unfathomable hardships the labourers are going through owing to stoppage of their income. In these circumstances, what looks sensible is to provide clothing, medicine and health care and throwing generally an umbrella of protection around these labourers”.

Indian Constitution does not provide for an Article which empowers one state to issue directions to the other which is not the case with the Centre.

Under A.256 (particularly) and A.258 of Indian constitution, the Centre can direct the states to take necessary steps.

These Articles form Part XI of Chapter II of Indian Constitution which talks about the administrative relations. Such voidness in case of states (lacking similar constitutional provision) is felt when it is witnessed that requests and appeals are being made by one state to the other without any support or power from the constitution especially in cases where workers belong to one state and work in host states as migrant workers.

[Disclaimer: The views expressed are solely of the author and they do not necessarily purport to reflect the opinion or views of LawStreet Journal]