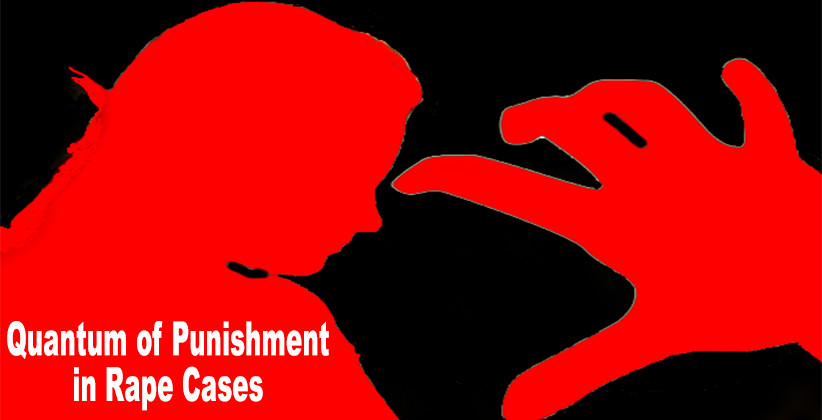 “There is a need to strongly challenge this stereotype of the ‘destroyed’ woman who loses her honor and who has no place in society after she’s been sexually assaulted. We believe that rape is tool of ‘Patriarchy’, an act of violence and has nothing to do with morality, character or behavior.”

Statement issued by “Collective of Women’s Group” in 2018.

A Delhi District’s Tis Hazari court on December 20, 2019 sentenced expelled BJP politician and MLA Kuldeep Singh Sengar to life imprisonment. He has also been asked to pay a fine of Rs. 25 lakhs out of which 10 lakhs will be given to the victim. Sengar has been convicted under the Indian Penal Code, 1860 and the Protection of Children from Sexual Offences Act, 2012 for the offence by a public servant committing penetrative sexual assault against a child, as rape survivor in this case was minor when she was raped. Incident relates to the rape of a 17-year-old girl on 4th June 2017 in Unnao district of UP.

How is quantum of punishment decided in rape cases?

Widely debated issue in the criminal law is whether offenders of heinous crimes like rape/gang rape should be given capital punishment or not. Section 376 of the IPC defines and prescribes punishment for rape. Section 376(2)(b) says that whoever being a public servant, takes advantage of his official position and commits rape on woman in his custody as such public servant or in the custody of a public servant subordinate to him shall be punished with rigorous imprisonment for a term which shall not be less than ten years but which may extend for life. Section 376A says that if a rape results in a death of the woman or causes the woman to be in persistent vegetative state, then punishment should be rigorous and not less than 20 years which can extend to life imprisonment or death.Gang rape is defined in Section 376B and it prescribes rigorous punishment of not less than 20 years and extendable to life imprisonment.

Recently gangrape and murder of a woman veterinarian in Hyderabad has aroused public anger. Demands are made to make rape offence punishable with capital punishment. The grandfather of Nirbhaya, who was victim of the gruesome gang rape in Delhi in 2012 has demanded that all rapist should be handed over to public and public themselves will only do justice. This case had shocked conscience of the nation in 2012 and nationwide protests had happened. Not only public took it to the streets but some MPs also echoed the same sentiment. Actor-Politician Jaya Bachchan made Rajya Sabha Chairperson somewhat uncomfortable when she demanded that rapists should be lynched by public. Union minister Harsimrat Kaur Badal came out with an unusual solution and urged government to make law which provides for conclusion of trial and pronouncement of judgement within the months equivalent to the age of victim. But we need to be mindful that in India, law doesn’t provide for street justice.

Deterrence is punishment which makes an example of each defendant to frighten the citizens to not do what defendant has done, hence its designed to avoid future crime. Preventive theory of punishment makes criminal act culpable for death, exile or imprisonment so as to protect society from the criminals.

A study by the Center of Death Penalty – at National Law University Delhi published in 2015 analyzed data of 15 years and it revealed that less than 5 % death penalties awarded by Trial court were confirmed by High courts. In 30 % cases HCs even ordered acquittal of the convicts. This shows the quality of judgements given by trial court. Another study by the same institute in 2018 says that of 162 death sentences, only 23 were confirmed by HCs and of the 12 cases that reached to SC, only one death penalty was confirmed, that of Nirbhaya gangrape and murder.  Hence its amply clear from the data that death penalty isn’t deterrent. Speaking to “The Wire”, legal researcher and professor of Law and Social Justice at King’s College, Dr. Prabha Kotiswaran said:

“Certainty in implementation of the law in its letter and spirit is the surest way of securing the interests of victims. When laws are not implemented, there is a temptation to ask for more draconian laws that are implemented even less”

One of the apprehensions of making rape punishable offence is also that perpetrators will tend to kill victim or leave them in such a state so as to no make compliant or recognize them.

Justice JS Verma committee which was appointed after Nirbhaya rape case to look in to the efficiency of death penalty for rape acknowledged that rape is a violent crime and punishment for rape has to be proportionate to the crime, as there are possibilities of survivor’s rehabilitation. committee suggested to increase the punishment extendable up to life imprisonment but didn’t prescribe death penalty due to lack of any correlation in preventing the crime of rape.

In cases like Bachan Singh v. State of Punjab [(1980) 2 SCC 684] and Macchi Singh v. State of Punjab [(1983) 3 SCC 470] through its judgements SC has narrowed down the application of death penalty to rarest of rare cases and also issued certain guidelines and criteria to determine whether the accused deserves the death penalty or not. These binding precedents restrict courts to award death sentence for rape to only cases with exceptional cases and also in the circumstances where the reformation and rehabilitation of the convict is not possible.

There is no evidence that harsh penalty has proved to be a deterrent to occurrence of crime.

Following are the words of Mahatma Gandhi in Article titled “To the Women of India” written in Young India on October 4, 1930, which is also quoted by Justice R. Banumathi in Mukesh & Anr. V. State of NCT of Delhi and Ors. [(2017) 3 SCC 719]

The real issue in rape cases and for that matter in any crime appears to be the time taken in the final disposal of cases. By the time case is closed by police and courts, the incident fades from the memory of prospective rapists. Hence deterrence doesn’t work here. Police and judicial reforms will only make law deterrent in real sense. In our law and order system, issue lies at fixing accountability. Crime happens in localities be it urban or rural. If we fix the accountability of inspector or sub-inspector who is the head-in charge of each police station then it will bring in sense of responsibility and accountability in police force. Judiciary is plagued with pile of cases. Speedy disposal of the cases by judiciary can give sense of justice to the victim and society at large and its not possible without the aid of legislature and executive.