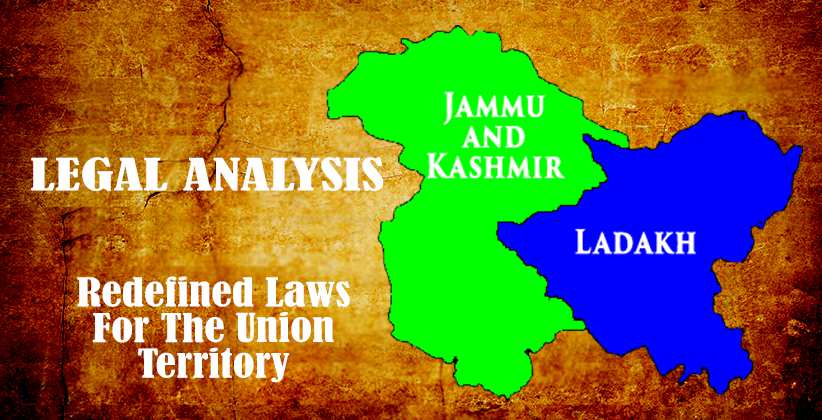 THE JAMMU AND KASHMIR REORGANISATION ACT, 2019 (34 of 2019), herein referred to as ‘the Act’, received the assent of the President on the August 09, 2019 was invoked by the Centre to issue orders recently with respect to the UT of J&K and Ladakh region under section 96 of the Act which allows Centre to issue orders pertaining to laws (along with necessary modifications) applicable to the UTs of J&K and Ladakh.

S.96: For the purpose of facilitating the application in relation to the successor Union Territories, of any law made before the appointed day, as detailed in Fifth Schedule, the Central Government may, before the expiration of one year from that day, by order, make such adaptations and modifications of the law, whether by way of repeal or amendment, as may be necessary or expedient, and thereupon every such law shall have effect subject to the adaptations and modifications so made until altered, repealed or amended by a competent Legislature or other competent authority

Jammu and Kashmir Reorganization (Adaptation of State Laws) Order, 2020 was published in the Gazette notification of MHA on 31-03-2020 and changes were introduced in THE JAMMU AND KASHMIR CIVIL SERVICES DECENTRALIZATION AND RECRUITMENT ACT, 2010 (Act No. XVI of 2010), which dealt with civil servants, their cadres, etc. (total of 15 Sections in the Act). This created a lot of distress among certain sections of media over the question of domicile. Section 3 of this Act was replaced with a new similar section and a new section i.e., S.3A was added subsequently which defined “domicile”. It talks about who shall be deemed to be a domicile of the Union territory of Jammu and Kashmir for the purposes of appointment to any post carrying a pay scale of not more than Level-4 (25500), which means employment equivalent to the rank of a constable or Junior Assistant which is lowest category among non-gazette posts.

The following shall be deemed to be domicile of Union territory of Jammu and Kashmir,

Section 3B of the above-mentioned Act, which is added, mentions that “Tehsildar” will be the competent authority for issuance of domicile certificate. However, in case of dispute, aggrieved parties can approach the Deputy Commissioner who shall decide the appeal within a period of 60 days. Therefore, the opportunity of being heard is given and thereby the Principle of Natural Justice is complied with. It is clear that the employment at the lower ranks is now given to people who are “deemed to be domicile” in the new category and not just the “permanent residents of the state” (earlier referred to as the “state subjects”).

Constitutionally speaking, the order is completely valid and even furthers the cause of A.14 (equality doctrine), A.19(1)(d) (freedom of movement) and A.21(right to life and liberty) of the constitution by enabling the uniform applicability idea envisaged in the constitution. It also furthers the cause of federal structure if one critically analyses that earlier special privileges different from the one given to normal states were reserved for J&K (but now it stands at the same footing with that of the other states). Generally speaking, only time will tell whether the jobs are created or lost considering the overall impact of recent steps taken by the Central Government.

As per the Constitution, the oath of the Judge of the High Court has to be administered by a Governor. But as the Union territory of Jammu and Kashmir is administered by a Lieutenant Governor, he now wears the hat of a Governor and can administer oath to the judges of the common High Court of the UTs of J&K and Ladakh. Articles 217, 219, 227 and Chapter VI of Part VI of the Constitution applies to this scenario with such modifications to accommodate the same.

This order was published in the Gazette notification of MHA on 18-04-2020 which modified Central Acts to apply them in the UT of J&K and Ladakh. This means that now, the new Bare Acts for the UTs of J&K and Ladakh will contain the updated Central Statutes (as appended in the schedule of the order) along with modifications as mentioned in the order.

For instance, Indian Penal Code, 1860 has one new addition of Section 354E, namely “Sextortion” which is on similar line with that of S.354A, i.e., Sexual harassment. In S.354A “sexual favors” is not defined but in this new addendum, it has been given in explanation appended to Section 354E.

Now one can think over the reason for insertion of a new section when there was already a similar provision. More so, if one looks at the Ranbir Penal Code (which was applicable in the state of J&K till recently due to A.370 of the constitution) there is no such term as “sextortion”. Similar modifications have been made in other central statutes which are now applicable to the UTs of J&K and Ladakh.

However, note that the order clearly mentions the prospective aspect of the changes as all previous rights, obligations, privileges or liabilities or anything duly done already remain unaltered.