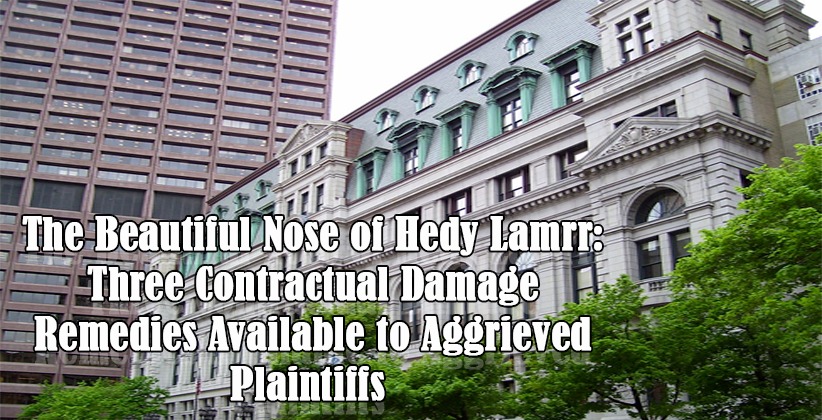 The case of Supreme Judicial Court of Massachusetts, Sullivan v O' Connor (363 Mass. 579) began when the plaintiff wanted a nose surgery done for her excessively long nose. Dr. James O’ Connor promised her a nose like that of Hedy Lamarr, the actress-inventor who invented preliminary technology for Bluetooth, Wifi and GPS and had certainly proved the maxim “beauty with brains”. Sadly, after three surgeries, Alice Sullivan’s nose turned out to be even worse and had lost symmetry. She sued for breach of contract and medical malpractice. The jury decided to award damages for breach of contract but ruled in favour of the doctor upon allegation of medical malpractice. Dr. Connor made an appeal against the verdict of $13,500 damages awarded to plaintiff by the trial court. The appellate court felt that the damages haven't been calculated appropriately. In Justice Kaplan’s words, she could recover 'out of pocket expenses' and value of her distress. The reader is made aware that lady entertainer contracted only for two surgeries.

For the purpose of analysis, we may identify two kinds of damages viz., direct damage from disfigurement of nose and the pain and suffering she had to undergo during the third operation.At this point, it is desirable for the reader to have questions in mind like- Should doctor's promise be enforced at all? Was it a good faith promise or taking it further, a guarantee for specific result? The court in the case under present analysis gave a direction to these queries by stating that contractual remedies are not forbidden for medical cases. Yes, it is a lawful contract and a suit is permissible if there is a breach. Doctors and physicians can seldom make such promises and it is unlikely that a medical practitioner of average integrity would do so.

arises when one expects a particular result from a contract and it represents the ‘loss’ for future ‘gain’. It is required that the person be put in a  good position as he would have been if the contract was performed. It focuses on the plaintiff's position and is the most commonly awarded remedy. So mathematically, the damages in the present case would be the value of operated and disfigured nose subtracted from the value of Hedy Lamarr's beautiful nose or the pain and suffering from the third operation. In the instant case, the judge was of the opinion that enforcement of expectation interest could lead doctors to practice ‘defensive medicine’. Legal theorists are of opinion that expectation damages make most sense in commercial context. Had Sullivan not waived her plea for expectation damages, the world would have seen the grant of these damages in patient-physician breach of contract cases. It is interesting to note that in the renowned case of Hawkins v McGee(84 N.H. 114), expectation damages were awarded for a "hairy hand". The case is distinguished from the present case by New Hampshire Supreme Courts’ reasoning that pain and suffering would have occurred even when the operation was successful,it was an implicit part of the contract for surgery.There was no extra surgery beyond the terms of the contract and detrimental pain and suffering was not caused by breach of contract.

Under the reliance interest, the plaintiff is reimbursed for loss after relying on the contract and is put in a good position as the person would have been if the contract had not been made. The position before entering the contract has to be restored. In the present case, the damages would be the value given to doctor for the operation, no pain and suffering and the previous long nose. These damages also focuson the plaintiffs’ position. The judge in this case has awarded damages as per the reliance measure.One may argue that the lady had herself contracted for the pain voluntarily but that reasoning would not stand against the pre-condition of two successful operations. The distress is the direct and consequential result of breach of the contract, therefore has to be compensated for.

Third type of remedyis the restitution interest whereby the plaintiff is restored any benefit given to defendant under the contract. This focuses on the defendants' position and is based on the principle of unjust enrichment as we know it today. Here, restitution damages would mean bringing the doctor to ex-ante position and allowing Aliceto recover net amount from the fee paid to the doctor for surgeries and doctors’ efforts to perform the surgeries. However, for simplicity only the doctors’ fee can be taken into account. Restitution damages would be too meagre and the standard of expectation damages would be too high. Moderation in the size of recovery should be permitted as necessitated by the court is certainly the best view adopted under the circumstances of the present case.The general rule is that the plaintiff can choose as to which of the three damage measures they want to pursue and often they choose expectation damage as the most favourable. Maybe, such plaintiffs believe in therule that agreements must be kept and benefits from the bargain must be accrued under all circumstances!