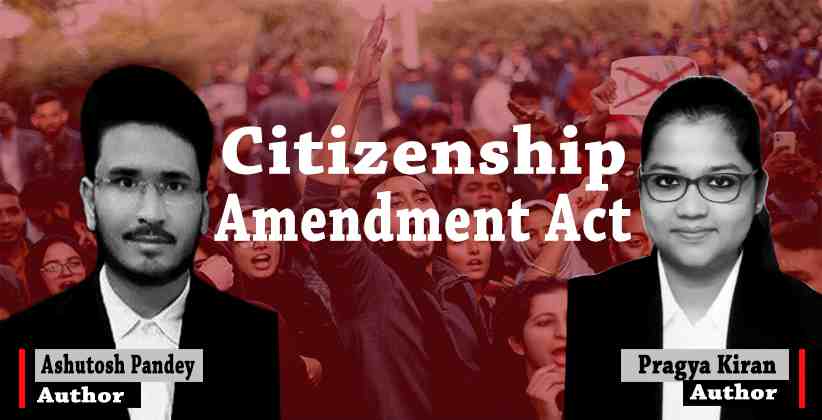 By Ashutosh Pandey and Pragya Kiran

In India, citizenship is regulated by the Citizenship Act, 1955 (CA). Sections 3, 4, 5, 6, and 7 of the Act specify that citizenship may be acquired in India through five methods – by birth in India, by descent, through registration, by naturalization (extended residence in India), and by incorporation of territory into India, respectively. The Citizenship Act, 1955 before the latest amendment did not allow illegal migration. So in order to evict people from the country, the only pre-requisite was to prove that he/she is an illegal migrant. This could have been simply done through National Register of Citizens (NRC) prepared under the Citizenship Act, 1955 which states that the Central Government may compulsorily register every citizen of India and issue national identity card to him and the Central Government may maintain NRC and for that purpose, establish a National Registration Authority as per Section 14A of the CA, 1955. Part III of the Citizenship Rules, 2009 also mandates the preparation of NRC, specifically Rule 17 mandates preparation of NRC and Rules 12 and 13 give power to the Central Government to decide on the applications made for registration.

But India is going one step forward in allowing all the persons belonging to minority communities, viz., Hindus, Sikhs, Buddhists, Jains, Parsis and Christians from Afghanistan, Bangladesh, Pakistan who entered India on or before December 31, 2014 to apply for citizenship in light of religious persecution. Now, the question here arises that why Muslims have been left out?

It is a fact that there are more than 50 countries in the world which have broadly a State religion of Islam and many of them follow the Shariat law. Despite the existence of almost a billion Hindus, there is no other Hindu majority country, every religious place important to Hindus is primarily in India, so there is no other choice left to the minority groups of the three nations except looking up to India for shelter. Therefore, the Indian Government acted in this manner on the presumption that Muslims cannot be religiously persecuted in Islamic Countries.

The Citizenship (Amendment) Act, 2019 (CAA) is in consonance with the principle of non-refoulement or ‘no-return’ envisaged under “The Convention Against Torture”, to which India is a signatory. It states that no nation can turn away refugees fleeing persecution or threats to their lives from their home country. India is bound by this principle as it has acquired the status of ‘Jus Cogens’, i.e., mandatory provisions of customary international law that all nations must abide by.

In Ram Krishna Dalmia v. Justice S R Tendolkar 1959, the Supreme Court of India held that “It is well established that while Article 14 forbids class legislation, it does not forbid reasonable classification for the purposes of legislation”. The other principles reiterated in this judgment are:

(a) A single individual may be treated as a class by himself under special circumstances which was also said in the case of Chiranjit Lal v. Union of India 1981.

(b) Presumption always lies in favor of constitutionality of an enactment.

Regarding Article 14 of the Constitution, the legal position is fairly settled. Article 14 encompasses both the negative concept of 'equality before law' as well as the positive concept of 'equal protection of law'. Thus, the same ensures that no special provision in favor of any one is made and that all are equally subject to the ordinary law of the land. The positive concept of equality does not postulate equal treatment of all persons without distinction but rather stresses on equality of treatment in equal circumstances or to similarly situated persons. A legislature is entitled to make reasonable classification for purposes of legislation and treat all in one class of persons on equal footing.

However, in order to pass the test of permissible classification two conditions must be fulfilled, namely,

In the case of Chiranjit Lal v. Union of India 1981the Supreme Court held that,“The classification may be founded on different bases, namely, geographical, or according to objects or occupations or the like. What is necessary is that there must be a nexus between the basis of classification and the object of the Act under consideration. It is also well established by the decision of this Court that Article 14 condemns discrimination not only by a substantive law but also by a law of procedure.''

Further, it was observed by the Supreme Court of India in the case of Clarence Pais v. Union of India 2001that “Historical reasons may justify differential treatment of separate geographical regions provided it bears a reasonable and just relation to the matter in respect of which differential treatment is accorded. Uniformity in law has to be achieved, but that is a long-drawn process. Undoubtedly, the States and Union should be alive to this problem. Only on the basis that some differences arise in one or the other States in regard to testamentary succession, the law does not become discriminatory so as to be invalid. Such differences are bound to arise in a federal set-up.”

In the case of Parisons Agrotech (P) Ltd. v. Union of India(2015) 9 SCC 6157, the Supreme Court held that, “once it is found that there is sufficient material for taking a particular policy decision, bringing it within the four comers of Article 14 of the Constitution, power of judicial review would not extend to determine the correctness of such a policy decision or to indulge into the exercise of finding out whether there could be more appropriate or better alternatives.”

The legislature is, therefore, competent to exercise its discretion and make reasonable classification. Differential treatment does not per se constitute violation of Article 14. Courts allow permissible classification, which includes selective application of a law according to the exigencies where it is sanctioned. Thus, the legal position aforementioned clearly establishes that any legislation may withstand challenge on the ground of discrimination and violation of Article 14 of the Constitution, in case the classification created by it is founded on an intelligible differentia which distinguishes persons or things that are grouped together from others left out of the group, and that differentia has a rational relation to the object sought to be achieved by the statute in question. The provisions of the Bill appear to have made a classification based on the fact of minority communities being persecuted in the specified countries on the basis of their religion and leaving their country without valid travel documents. The Bill appears to have the object of facilitating all such minority communities without any discrimination.

Conclusion: CAA is in consonance with the provisions of our Constitution

We think CAA is in consonance with the provisions of our Constitution and has the pious object of facilitating all such minority communities without any discrimination who were religiously persecuted and the classification is reasonable and is founded on an intelligible differentia. Under -inclusion or non-inclusion is totally a policy matter and it cannot be challenged under Article 14 of the Indian Constitution. Article 14 is not to second guess Parliament’s policy and its legislative wisdom.

We strongly believe that the latest amendment will sustain all the challenges under Article 14, 15 and 25 of the Constitution of India and obviously doesn’t malign the fabric of Secularism. We don’t have to redress all wrongs or act too generously going beyond our abilities to qualify the test of Constitutionality under Article 14. Finally, it is not an act to worsen the situation of anyone but for providing sanctuary to the minorities and it is actually reducing the number of people who have to leave India by identifying the religiously persecuted minorities.

In conclusion, it is apt to mention that the origins of the CAA 2019 can be traced back to the Nehru-Liaquat Pact of 8th April 1950, whereby both India and Pakistan agreed to protect minority rights. However, in light of the incessant persecution that minorities face in the three neighboring countries, especially Pakistan, it befalls the Indian state to ensure the obligations of the 1950 pact are carried out. It must be highlighted that the amendment, when viewed in the context of the Nehru-Liaquat Pact, concerns itself with the minorities as existed back then, and Ahmadis were declared a minority group only as late as in 1974 vide the Second Amendment to the Pakistan Constitution. Shias, in essence, continue to not be considered as a minority group by the Pakistani government. Under-inclusivity does not render the 2019 amendment to the Citizenship Act unconstitutional.

The act may or may not serve any ideological motive of the Government but processions and deliberations made against it by many student leaders from prestigious institutions of the Nation, captivated by abetted ideologies, and provocations of political parties and institutions which are definitely fulfilling malicious agendas and trying to polarize the mass on religious grounds. Giving the color of religion to any act which may support the opposition to strengthen its stand has been a long term practice in India but the youth should not get carried away by the charm of the agenda and idea of getting negatively popular and entering politics.

Disclaimer: The views, thoughts and opinions expressed in the text belong solely to the author and do not necessarily reflect the opinion of LawStreet Journal.