Know The Truth: Senior Advocate Ashwini Upadhyay denies any connection to the video with inflammatory slogans; demands strict action against those involved 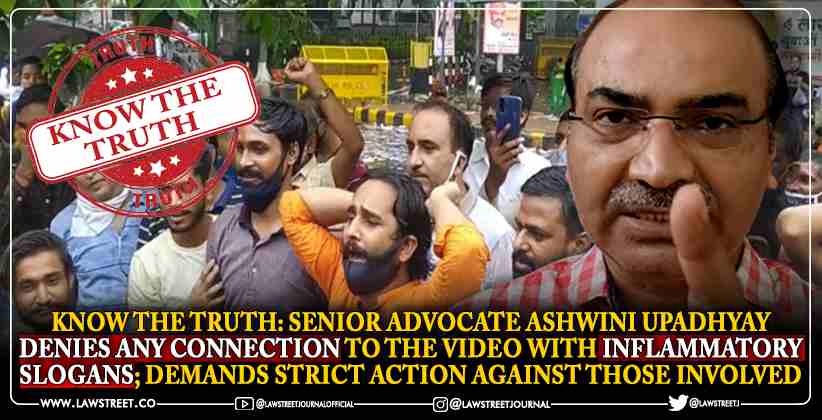 Many news media outlets have published articles on a viral video showing inflammatory slogans at Unite India Movement Protest at Jantar Mantar which took place on 8th August. However much of this news is filled with misinformation. Ashwini Upadhyay, the convener of the Event, has filed a police complaint against the people in the video shouting inflammatory slogans and against those associating his name to those spreading chaos.

Mr. Upadhyay filed a PIL last month in the Supreme Court seeking abolition of the Indian Penal Code made in 1861 and introduce laws which suit the contemporary Indian Society. The Event at Jantar Mantar on 8th August 2021 was organized to celebrate the historic occasion of the anniversary of Quit India Movement and to make people aware towards the harms of the colonial laws. PM Modi urged people to start the Bharat Jodo Movement in Man ki Baat on July 25th. This event was an effort towards that direction.

Mr. Upadhyay, said in an interview to ABP News,

“8th August is the anniversary of Quit India Movement, so we invited 50 people to celebrate it and to oppose the British Laws and request implementation of Uniform Civil Code”.

According to DDMA guidelines, permission is not needed for celebrating Historic events. Since this event was Historic and not political, it was constitutional and legally valid. Moreover, as soon as more and more people were seen flocking in, Ashwini Upadhyay called off the event. It is being said in many news outlets that no permission was taken from the police before this event. But the truth is that as per DDMA guidelines no permission was necessary to host this event since it was a historic event not a political or cultural one.

Many distinguished guest were a part of this program including Gajendra Chauhan, who played the character of Yudhishthira in Mahabharat. Mr. Upadhyay addressed those present about the need to abolish 222 colonial British era laws that still continue to govern us. “These laws were made by British not to give justice to Indians but to strengthen their own power,” said Mr. Upadhyay.

Mr. Upadhyay expressed concern over the fringe elements who tried to malign his life-long struggle against the British Laws.
He clarified that he did not invite any of the people shown in the viral video, and he does not know them. He invited 50 people and when groups of people started coming, he called off the program.

“I came there at 11 am and left at 12 after the crowd started gathering. The footage in video is from 5pm therefore has nothing to do with me,” said Mr. Upadhyay.

Mr. Upadhyay filed a complaint with Delhi Police against the persons in the video. He requested full investigation into the truth behind the video and demanded strict actions against such people. He also demanded criminal defamation cases against those who tried to blame him for this. Mr. Upadhyay also pressed that because of weak colonial laws in our country such fringe elements spread religious frenzy without any fear.