Home Speak Legal Labor’s Day or Not: Workers in the country continue to suffer Lockdown in India
Speak Legal 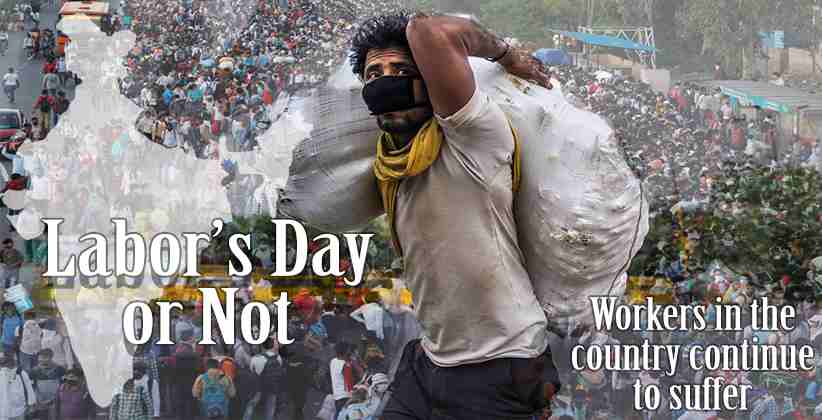 Labor Day has its origin of the Labor Movement in America and was traditionally observed to pay tribute to the contributions and achievements of the country’s workers. It was created in the late 19th century and was declared as a federal holiday in 1894. The day eventually came to be known globally and is today celebrated as an International Public holiday to commemorate the hard work of laborers and raise a voice against workers’ rights violations, poor conditions including lengthy workdays, poor pays, and child labor.

The first Labor Day celebration in India took place on May 1st, 1923 in Chennai and was organized by the Labor Kisan Party of Hindustan. Several people marched the streets on the occasion, calling for an improvement in the working conditions of the labor class in the country. The day compels us to reflect on the rights and dignities that we as individuals enjoy and calls for a fight against the conditions of those less privileged.

It is pertinent to state though, that the current conditions of workers amid the lockdown have no conformance with the essence of Labors’ Day. At the start of the year (2020), the government had promised the implementation of the four codes particularly on wages, industrial relations, social security, and occupational safety including health and working conditions. However, much to the labor class’s dismay, these principles have remained from reality.

On the declaration of a nationwide lockdown on March 24th, 2020, thousands of migrant workers were left with nowhere to go. With no concrete provisions declared for them, they were forced to walk back to their villages for hundreds of kilometers with little on hand. The scenario depicted the ignorance of the government against its people and highlighted the stark disparity in the living condition of the rich and the poor. So much so that even the police personnel were seen resorting to atrocities against the workers in the name of controlling the havoc that ensued amongst them.

Commenting on the sorry state of affairs, a spokesperson from the People's Health Movement stated, "What is really worrying is the huge migration that has started across the country. You just can't stop public transport like that. The lockdown should have been done in a phased way. People shouldn't be stranded without income, without work. Even in an authoritarian state, they would know that this is something the state has to do."

Nearly 85 % of India’s population works in the informal sector and many of them have no access to means of livelihood in the current scenario. Despite the central government’s announcement of a $23 billion fiscal stimulus package to help the poor address financial hardships, the lockdown has proved to be a severe crisis for India’s migrant laborers. The daily wages have dried up, and most of them can barely afford rent and food in the cities, thereby forcing those to flee back home with no means of available travel.

Circumstances across the country depict poor pictures with workers being stuck in informal settlements similar to that of a detention camp, health officials using hosepipes to douse the laborers’ in disinfectants repeatedly, and people walking the hundreds of kilometers back home with some breathing their last on the arduous journeys.

While several schemes have been announced by the government to remedy the situation of the workers, they have barely proved to be effective. For instance, the 10% increase in the minimum wages under the Mahatma Gandhi Employment Guarantee Act (MNREGA) of 2005 proves to be a regular adjustment against the inflation to the wage rate. It fails to act as an additional resource provision in line with the ongoing crisis. Similarly, the financial package promised by the government only constitutes 1 percent of the GDP of India and may therefore not prove as effective in improving the financial plight of those hard-hit.

Throwing further light on the situation is a detailed report published by a national network called - “The Stranded Workers Action Network (SWAN)” on 15th April 2020. The report takes into account the interactions between the researchers and around 10,000 workers whom they contacted through a helpline. Its key findings showed that 89% workers had not yet been paid wages by their employers during the lockdown, 44% were stranded with no money or rations left, 78% workers had less than 300 rupees left, 96% had not received rations from the government, 50% had rations left for less than 1 day. This enumerates the deplorable conditions that the workers are currently made to face amid lockdown.

The judiciary of the country too has taken a passive approach in the matter. The Apex Court on 7th April 2020 expressed its inclination to not interfere with the decisions that have been taken by the central government in regard to the migrant worker. “We cannot take a better policy decision at this stage," it said. The bench presided by the CJI had pronounced the said hearing in a plea which was filed by former IAS officer Harsh Mander and RTI activist Anjali Bhardwaj in regard to the payment of wages to migrant workers amid the lockdown imposed due to the COVID-19 outbreak. The Court’s reactions to many of the petitions being filed in order to seek relief for these laborers have been reduced to a mere fragment of a ruling by the judiciary to not proliferate their wisdom over the government’s policy.

A month into the lockdown, the country is slowing making way to stabilize the financial situation of its people, and especially that of the migrant workers. To this effect, the Union home ministry on 30th April relaxed the lockdown measures to allow the travel of migrant workers across states in line with strict health protocols. The ministry further clarified that the new guidelines amid the pandemic will come into effect from May 4, 2020 and will lead to a betterment in the situation of those below the poverty line. However, only time will tell if the ministry’s move will ease the plight of the hard-hit or merely prove to be a futile attempt at doing so.

Leaving with the wise words of Prashant Bhushan – A Public Interest Lawyer in the Supreme Court who said, “Shutting everything down, you may be able to save 100,000 lives, but if the lockdown continues, you'll kill one million from hunger and starvation."