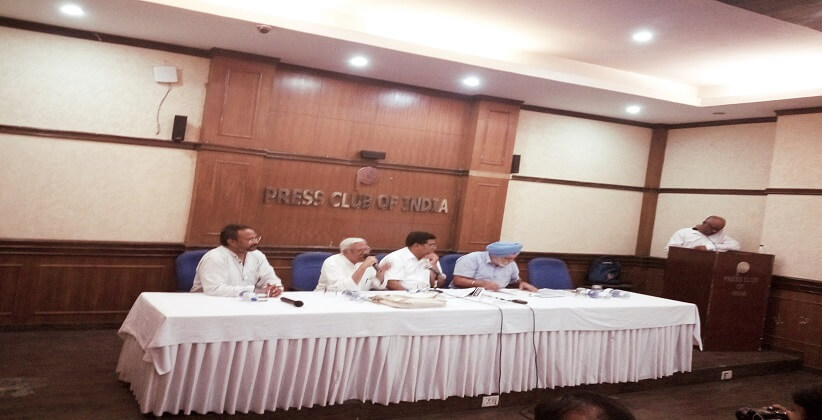 As citizens’ protests surge, India’s Dalits, farmers, and ex-servicemen have come together, with support from other sections of the society for demanding justice and seeking redressal for their grievances. A conference in this regard was conducted at Press Club in New Delhi on July 26, 2018.

Seeking attention of the government, the individual demands of three organisations are as follows:

All India Ambedkar Mahasabha (AIAM)
1. Withdrawal of all cases against Chandrashekhar, Shiv Kumar Pradhan, Sonu, Upkar Bawre and others detained under NSA and those arrested or implicated on           2nd April 2018 Bharat Bandh.
2. Restoration of SC, ST (Prevention of) Atrocities Act 1989 as it existed with its all provisions and penalties prior to the Supreme Court Judgement on 20th           March 2018.
3. Establishment of Indian Judicial Service under Article 312 of the Constitution.

All India Kisan Sabha (AIKS)
1. Minimum Support Price (MSP) for all crops at one-and-a-half times of cost of production (C2+50%) and guaranteed procurement.
2. One-time waiver of all loans of all farmers including bank loans, cooperative loans and private money lender loans.
3. Land to the landless poor, house sites for the homeless, ban on forcible acquisition of farmers’ land for corporate or corridor projects without proper compensation and rehabilitation, stringent implementation of the Forest Rights Act (FRA).

In addition, all the three organisations have decided to unitedly stand up and fight for the following three vital issues:

1) Put an end to the hate-driven mob violence and lynching plaguing the country. Fast-track the arrest and prosecution of those responsible for murders and those backing them in an exemplary manner.
2) Revive and vote into law the Women’s Reservation Bill guaranteeing 33% reservation for Women in the Lok Sabha as well as state assemblies– within the term of the current (16th) Lok Sabha.
3) Scrap the Aadhaar, which has wreaked havoc with welfare schemes by widening exclusion, compromised civil liberties by creating new forms of discrimination, and made real the threat of a surveillance state.

A panel comprising all three organisations invited political parties & political leaders to engage with them with specific reference to their demands mentioned above. They also invited citizens, as well as collectives and organizations, to join the movement and stand up for their rights. It was revealed that the coming few months will see a host of actions on the ground and in media (including social media) to highlight their issues. "We shall, no longer, fall prey to this vicious cycle of electoral politics, power & money. The tipping point has been reached", the panel said.

In order to get their demands accepted, a protest would be initiated with 'Bharat Band' on August 09, 2018. All rallies & protests will be synchronized where the three constituents (Dalit, Kisan and Jawan) will mobilise people across the country towards redressal of their demands.

Along with this, in the meanwhile, around 2 crore postcards will be written to the President house with a 'Postcard Andolan' seeking the fulfillment of their demands.

Ban on Women in Sabarimala temple cannot be ignored: SC