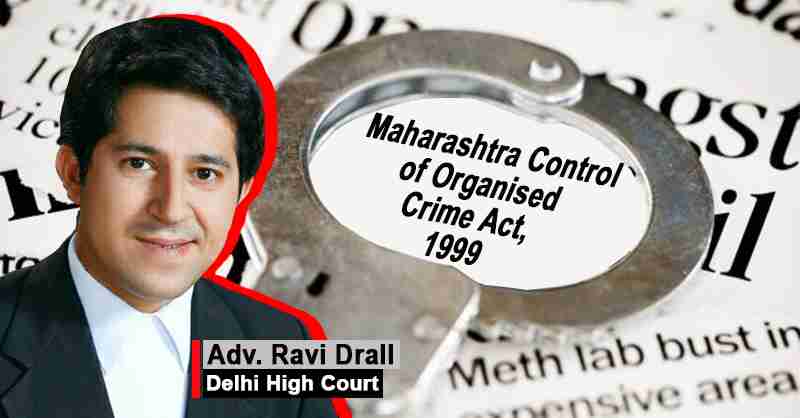 The Maharashtra Control of Organized Crime Act, 1999 was a law enacted by the state of Maharashtra in India to combat organized crime and terrorism. The Act provides the State Government with special powers to tackle these issues, including powers of surveillance, relaxed evidentiary standards, and procedural safeguards, and prescribing additional criminal penalties, including the death penalty.

To make special provisions for prevention and control of, and for coping with, criminal activity by organized crime syndicate or gang, and for matters connected there will or incidental thereto.

The Statement of Object and Reasons that prefaces MCOCA identify organized crime as a threat, linking it to terrorist activity and note the economic impact of illegal wealth and black money on the state's economy. Government has, therefore, decided to enact a special law with stringent and deterrent provisions including in certain circumstances power to intercept wire, electronic or oral communication to control the menace of organized crime."

MCOCA applies to the entire State of Maharashtra. The Home Ministry of the Government of India extended the applicability of MCOCA to the National Capital Territory of Delhi as well, by a notification dated 2 January 2002. MCOCA overrides all other Indian laws and will prevail over any Indian law that conflicts with the provisions that MCOCA contains.

This act was brought in the year of 1999 with the main purpose to regulate and control the increase in organized crime & terrorism which has seen an upsurge in the economic capital of India by providing a special framework to combat criminal activities like murders and extortion of money from businessmen etc. The extended jurisdiction to the National Capital Territory of Delhi in 2002 of this Act, constitutes one of the peculiar features apart from the power to intercept wires, electronic or oral communication means, admissibility of confessions before senior officials, no provision for anticipatory bail within 6 months to the accused from the date of commission of offence, etc.

The interpretation or definition clause of the Act u/s, 2 defines these terms which are as follows:

Provision of the special courts constituted under MCOCA 1999 and its jurisdiction & qualification to preside over them as a judge?

Section-5 of the Act provides that the State Government, by notification in the official gazette, constitute one or more special courts for such area/areas and for such cases/group of cases which it notifies in the gazette itself.

Qualification as to preside over the judge of Special Court:

Jurisdiction of the Special Court:

Power and procedure exercised by the special court under MCOCA 1999?

The Special Courts have the following powers as has been conferred on it by the Act:

If the Special Court is of the opinion that it is undesirable to try a case in a summary way, then he may dispense with such summary procedure and rehear the case, as if he is the magistrate to try that case in a trial and abide by the provisions of CrPC. [Section 9(2)]

Under Indian criminal procedure, confessions made to police officers are ordinarily inadmissible, and Section 25 of the Indian Evidence Act prohibits such confessions in order to eliminate the possibility of eliciting confessions by force or intimidation during interrogation. MCOCA makes an execution to this rule, allowing certain confessions made to police officers to be admissible in evidence. The conditions for this exception to apply are that the police officer must be of the rank of Superintendent or higher; the confession must be recorded; the person making the confession must be cautioned that they are not bound to make the confession and that it can be used against them in evidence. MCOCA further requires that the person making the confession statement should be produced before a judicial magistrate, who is to scrutinize the statement and may hear any complaints about torture, following which the magistrate can order a medical examination if necessary. MCOCA does not specify a minimum period of time for the person to be produced before a magistrate, apart from specifying that it should be done "without unreasonable delay". MCOCA also makes confessions admissible not only against the person making them, but also against any co-conspirators, abettors, or others named by the personal confession.

Presumptions as to offences committed under the MCOCA?

Section 22 provides for the presumption as to the commission of the offence by the accused person if the following are proved and the contrary is not established:

MCOCA provides special powers to the police to conduct surveillance, in the form of intercepting written, oral, and electronic evidence. All investigations must be directed by a police officer who holds the minimum rank of Deputy Superintendent of Police, and all information about the commission of offences have to be recorded by police officers holding a minimum rank of Deputy Inspector General of Police.

Exceptions to rules of evidence

MCOCA further establishes certain exceptions to the Indian Evidence Act, and the Code of Criminal Procedure. Unlike in other criminal trials, MCOCA Special Courts are allowed to take into account some prior conduct of persons accused of offences under MCOCA, including previous prosecutions under MCOCA or other laws permitting preventive detention, as well as prior orders of caution for habitual offenders. Additionally, when a person is accused of offences under MCOCA, the Court may operate under a presumption that any unaccounted-for property found with the accused person was obtained illegally unless the person is able to prove otherwise. Similarly, if a case of kidnapping or abduction is proven in connection with an MCOCA trial, a Special Court can presume that it was for ransom.

India does not have a law for the protection of witnesses, although since 2018, a temporary Witness Protection Program is in place following a Supreme Court ruling requiring one until Parliament legislates on the subject. Under MCOCA, however, a Special Court can take certain measures to protect the identity of witnesses, including holding court proceedings in special locations, removing mentions of witness names in their orders, keeping witness protection orders sealed, and refraining from publishing the orders of any court proceeding. The violation of any witness protection orders can result in imprisonment for up to one year and a maximum fine of Rs. 1,000.

Important cases and arrests made under MCOCA 1999?

Some of the landmark rulings of the Courts on MCOCA:

MANU/SC/0787/2015 IN THE SUPREME COURT OF INDIA State of Maharashtra and Ors. Vs. Shiva and Ors. Criminal - Acquittal - Setting aside thereof - Special Court under Maharashtra Control of Organized Crime Act, 1999 convicted Respondents of charges framed against them - High Court set aside such order - High Court held that mere proof of filing of charge sheets in past was not enough to hold Respondents in such charge sheets to be guilty of offences - Whether High Court was justified in allowing appeal and setting aside orders of conviction recorded by Special Court

The offences which the Respondents are alleged to have committed after the promulgation of the Act, 1999 were not proved against them. The acquittal of the Respondents in criminal cases signified that they were not involved in the commission of the offences with which they were charged. Not only that the Respondents were acquitted of the charge under the Arms Act even in criminal cases. No appeal against that acquittal had been filed by the State. This implied that the prosecution had failed to prove the second ingredient required for the completion of an offence under the Act, 1999. The High Court was, therefore, right in holding that Section 3 of the Act, 1999 could not be invoked only on the basis of the previous charge sheets for Section 3 of the Act, 1999 would come into play only if the Respondents were proved to have committed an offence for gain or any pecuniary benefit or undue economic or  other advantages after the promulgation of the Act, 1999. Such being the case, the High Court was justified in allowing the appeal and setting aside the order passed by the Trial Court.

MANU/MH/0938/2006 Sherbahadur Akram Khan and 6 Ors. Vs. The State of Maharashtra, Criminal - Discharge application - Accused was arrested under section 143 to 149, 202 and 34 of Indian Penal Code, 1860 as well as section 23(2) of Maharashtra Control of Organized Crime Act, 1999- Charge sheet was filed against the accused it is obvious that some of the accused have been charged for offences which can, by no stretch of the imagination, be considered to give the accused any pecuniary or undue economic or other advantage, either for the accused himself or for any other person - In the case of State of Maharashtra v. Bharat Baburao Gavhane and Ors. It was observed that merely stating that a gang leader and his associates run a crime syndicate with a view to gain pecuniary benefits and advantages and supremacy over rival gangs by violence, intimation, and other coercive means, is not sufficient to maintain a prosecution under the MCOC Act - Held, MCOC Act is not maintainable, the accused can only be prosecuted under the general law i.e. Indian Penal Code. Appeal allowed the charges and the sanction under the MCOC act are quashed and set aside.

MANU/MH/0173/2005 Altaf Ismail Sheikh Vs. The State of Maharashtra and Ors. Ratio Decidendi: If the activity of the person related to the period prior to the day on which MCOC Act came into force, it cannot be said to be an offence under MCOC Act even if it was an offence under some other statute in force at the relevant time."

MANU/SC/0924/2009 Jamiruddin Ansari Vs. Central Bureau of Investigation and Anr. Code of Criminal Procedure, 1973 - Section 156 (3)--Maharashtra Control of Organized Crime Act, 1999 (M.C.O.C.A.)--Sections 9 (1) and 23 (2)--Private complaint--Whether entertainable under Section 9 (1) of M.C.O.C.A. by Special Court?--Held, yes--But under Section 23 (2) of M.C.O.C.A. sanction has to be obtained by a police officer, not below the rank of A.D.G.P. before Special Court can take cognizance of such complaint--As in view of provisions of Section 25 of M.C.O.C.A. provisions thereof have overriding effect over provisions of Cr. P.C.--Special Court not entitled to invoke Section 156 (3), Cr. P.C.--For ordering special enquiry on private complaint taking cognizance thereon--Majority decision of Full Bench of High Court erroneous--And that of minority correct.