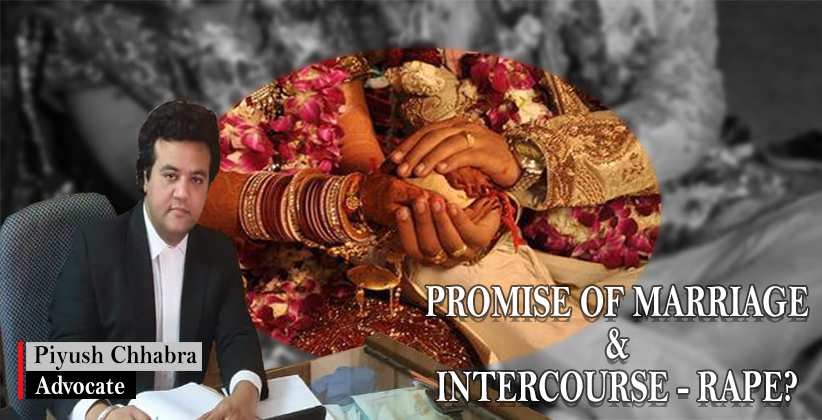 Rape is one of the most heinous offences defined under the Indian Penal Code. The interplay of the force used by the man to have or possess the woman’s body and the unwillingness/non-consent of the woman to submit her body to that force constitutes rape. Section 375 IPC [1] defines rape quite clearly and exhaustively. While taking into account the situations/circumstances where the ‘consent’ so obtained from the woman stands vitiated, Section 375 IPC nowhere speaks of consent so obtained by the man on a promise of marriage with the woman later.

Would then the consent of the woman to the intercourse become consent under misconception of fact if the man promised to marry her and eventually he did not? Affirmatively, the Courts tend to invoke section 90 IPC [2] in such cases and decide if the man promised to marry the woman just to allure her into sexual intercourse. However, this approach tends to defeat the very purpose of law and further leads to many complexities in implementation of the same which is being discussed in the following paras.

Promise of marriage- a misconception of fact?

To put it very simply, as per Section 90, IPC a consent is not a consent if given by a person under a misconception of fact. It is important to understand here that the sexual act between the man and the woman itself is the ‘fact’ and not the promise of marriage.  In this regard, in Uday v. State of Karnataka [3], the Apex Court observed that:

“A false promise is not a fact within the meaning of the Code. We are inclined to agree with this view, but we must add that there is no strait jacket formula for determining whether consent given by the prosecutrix to sexual intercourse is voluntary, or whether it is given under a misconception of fact.”

As may be seen here, though the Court seemed to agree that a false promise is not a fact, yet qualified the observation and again paved way for Section 90, IPC to operate and vitiate the consent. The latter part of the said observation being relied upon by the Courts in several judgments tends to operate as law.

Recently in Pramod Suryabhan Pawar v. State of Maharashtra [4], the Apex Court differentiated between ‘a false promise’ and ‘a breach of promise’. The Court held that “a breach of a promise to marry cannot be said to be a false promise. To establish a false promise, the maker of the promise should have had no intention of upholding his word at the time of giving it.” However, the fact pertaining to intention of the man/promisor at the time of making it is very difficult to ascertain. What made him promise? Did he mean his words at the time of giving them? Did he promise at all? Such questions seldom have straight answers and need cogent proofs which are often not possible to fetch. Moreover at the grass-root level police officials who investigate the case fail to understand such conceptual nuances and same leads to victimisation.

The omission of the ‘consent given under promise to marriage’ from the language of Section 375 IPC clearly speaks of the legislative intent behind the provision and thus imbibing Section 90 IPC in the form of ‘misconception of fact’ seems completely unnecessary in such cases.

Implications of misinterpretation of law

Section 375 IPC is hitherto not gender neutral. In law, rape is committed only ‘by man against the woman’. However, when a promise to marry someone turns futile and a consensual intercourse becomes rape, the man tends to suffer equally as the victim. The term ‘rapist’ may prove to be detrimental to the personal as well as professional life of the accused, even after his acquittal. The stigma flows throughout his life.

Once a complaint is lodged against the accused person, he may be arrested without any investigation. Even otherwise, a thorough investigation is not possible in such cases in the absence of proper evidences. Generally, the complaints are lodged after a long time, so the sexual intercourse cannot be ascertained through medical examination of the victim. Even the fact whether the promise was made is not easily ascertainable. Law as interpreted by the judiciary penalize ‘false promise to marry’ which is often mis-read by the police officials as ‘promise to marry’ and the accused person lands in the jail without trial.

In such cases, the converse may also be equally true, i.e. a woman alluring a man into intercourse by making a promise to marry him later, however neither our legislature nor our judiciary entertain the idea of a man being vulnerable at the hands of woman, more so sexually. At this juncture, law seems to be tilted in favour of the woman and the man is left with no remedy to his avail when he is a Victim of promise to marry. It is important to understand that the ends of justice remain too far when law differentiates its subjects on the basis of their gender when the circumstances and chances of victimisation are same.

With the trends of reporting false rape cases on an increase in the country one cannot overlook the fact of misuse which has also been observed by the Delhi High Court [5] in 2017 that:

“...on number of occasions that the number of cases where both persons, out of their own will and choice, develop consensual physical relationship, when the relationship breaks due to some reason, the women use the law as a weapon forvengeance and personal vendetta. They tend to convert such consensual acts as an incident of rape may be out of anger and frustration thereby defeating the very purpose of the provision. This requires a clear demarcation between the rape and consensual sex especially in the case where complaint is that consent was given on promise to marry. (para 10)

Considering the patriarchal set-up of our society and physical strength and capability of the man, there is no denying that stringent rape laws are a need of the hour. However, stretching this concept of “a physically strong, overpowering and exploitative man” to the cases of purely consensual intercourse on the promise to marry would amount to injustice to the man on various fronts as discussed above. No individual should be allowed to take undue advantage of the situation having played an equal part therein. Victimizing woman and penalizing man for the same act is morally as well as legally untenable. The present situation calls for a gender neutral provision to this effect with less severe punishment as well as to be made bailable and which may not be governed by strict rule of evidence alike section 376 Indian Penal Code.

The author is proprietor of Delhi based law firm Chhabra Legal Advisers. This article is written with the help of Advocate Sapna sharma.

Compulsory use of Aarogya Setu App May Lead to Legal Complications: Tech Experts to Government