How to save Stamp duty, Legally? 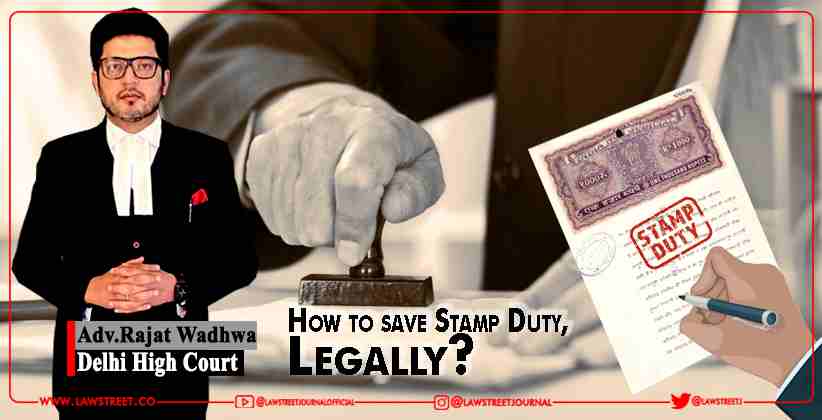 The Indian Stamp Act, 1899 (In short ISA) prescribes Stamp Duty payable inter-alia on transfer of Immovable Property. The mode for transfer of Immovable Property can be Sale, Gift or Exchange as defined in the Transfer of Property Act, 1882 (In Short ‘TPA’). Since ‘stamp duty’ is a state subject, it varies from state to state. All the aforesaid kind of transfers attract stamp duty ranging from 4% to 12% of the Circle Rate or the Market Value, which is usually paid by a buyer or transferee of an Immovable Property. An Instrument, which is not “duly stamped” as per Section 11 of ISA, is liable to be impounded under Section 33 of the Act. Such insufficiently stamped Instrument is also inadmissible in evidence as per Section 35 of ISA. A person may face prosecution for insufficiently stamping an Instrument in terms of Section 43 of ISA and may face other penalties under the Act. But is there a way to save Stamp Duty without being Penalised?

It is general perception that the term ‘Release Deed’ or ‘Relinquishment Deed’ only applies in cases of Legal heirs of deceased relinquishing their inherited share in favour of other Legal Heir(s) in furtherance of a family Settlement/Arrangement. It is true that a legal heir can relinquish his share in a Property but then such kind of transactions are not restricted only to Legal heirs relinquishing their share, but are equally applicable in all cases where a property is jointly owned by different Co-Owners, whether or not they are related by blood. What is important is that there should be a preexisting right in an undivided Immovable Property, which then entitles one co-owner to relinquish his share in the property in-order to enlarge the right of other co-owner(s) into absolute title for the entire Property. Though Release is not defined under ISA, TPA or any other Indian law, but the term finds a mention in Article 55 of ISA which is reproduced as under: -

“55. Release. That is to say, any instrument [(not being such a release as is provided for by Section 23A)] whereby a person renounces a claim upon another person or against any specified property

Same duty as Bond (No. 15) for such amount or value as set forth in the Release.

(b)  In any other case One Hundred Rupees”

A bare reading of ‘Article 55’ of ISA clarifies that release is an Instrument whereby a person renounces his claim upon another person or Property and the stamp duty payable in case of such renouncement may go upto Rupees One Hundred only.

A full bench of Madras High Court in matter titled “Board of Revenue & Anr. Vs. V.M. Mugugesa Mudaliar of Gudiyatham” (AIR 1955 Mad 641) was dealing with a reference wherein 3 Co-Owners of Immovable Property, after having resigned from a Partnership Firm, executed Release Deed in favour of other 2 Co-Owners/Partners who continued with the Partnership. When the Release Deed was presented before the Board of Revenue, it was of the opinion that the Instrument was liable to charged under three heads namely ‘Instrument of dissolution of Partnership’, ‘Instrument of Release’, and ‘Instrument of Conveyance’. The Court examined the issue and held that

The Court further held that

“With respect, we follow the principle of this Full Bench decision and apply it to the present case. We hold that the document in question is only a release within the meaning of Article 44 of Schedule I-A of the Stamp Act and was properly stamped as such. It was not liable to be charged either as a deed of dissolution of partnership or as a conveyance.”

Following this decision, the Division Bench of Delhi High Court in “Shri Mahip Singh Thakur vs Mrs. Hema Thakur, Shri Vikram Thakur, Shri Goruv Thakur and Ms. Madhu” reported as 120(2005) DLT 173 held that “We have given our careful consideration to the arguments advanced by learned counsel for the parties.

The law is well settled with regard to the documents of release of property or release of share from the property owned by two co-owners and one of them effacing himself in favor of the other. The essential ingredients of the release are that there should be already a legal right in the property vested in the release and the release should operate to enlarge that right into an absolute title for the entire property as far as the parties are concerned. There cannot be any release by one person in favor of another, who is not entitled to as co-owner.”

The Hon’ble Delhi High Court further went on to hold that:

“From the above discussion and taking into consideration the fact that both the parties had share as co-owners in the property at Nahan as well as Delhi, the relinquishment by appellant of his share in the property at Delhi in favor of the respondents and respondent No. 1 releasing her share in the property at Nahan in favor of the appellant, by no stretch of imagination, can be construed as partition. Therefore, the impugned order is set aside. In vie of that, Ex. C – 3 is instrument of release. The parties are not bound to pay stamp duty as per Article 45 of the Stamp Act. They will, however, pay the requisite stamp duty livable on a release deed. Appeal is allowed. Registry is directed to draw the decree accordingly.”

Release/Relinquishment in favour of a Particular Co-Owner

Since an act of Release only involves renouncement of a claim over a Property, such a renouncement cannot be in favor of a particular Co-Owner and should operate to enlarge the rights of all Co-Owners (incase there are more than one) in equal proportion. The Delhi High Court in matter titled “Narinder Kaur & Ors vs Amar Jeet Singh Sethi & Ors” reported as 2000 (54) DRJ 53 observed

“At this stage I would only mention the basic legal fallacy in the document is that a Relinquishment perforce cannot be in favor of any particular co sharer; if it is to operate in favor of a particular party it amounts to a transfer and must be effected either by Sale Deed or by a Gift Deed, depending entirely on whether there was any consideration for such a transfer.”

Similar view has been taken by the full bench of Andhra Pradesh High Court in decision titled “Kothuri Venkata Subba Rao & Ors. vs. District Registrar of Assurances, Guntur, AIR 1986 Andhra Pradesh 42. A contrary view taken by Delhi High Court in “Srichand Badlani v. Govt. of NCT of Delhi & Ors.” [W.P. (C) 7314/2013], without noting the above precedents, did not find favor in a subsequent decision of Delhi High Court in “Tripta Kaushik & Ors. vs Sub Registrar VI-A, Delhi & Ors.” reported as 270 (2020) DLT 36 where the Court has upheld the view that a Release/Relinquishment cannot be in favor of a particular Co-Owner or else it will be treated as a Conveyance or a Gift thereby attracting stamp duty payable on such instruments.

How can one use Release/Relinquishment Deed to save Stamp Duty?

As seen above, it is clear that one co-owner can release/renounce his right in an Immovable property upon paying a stamp duty of Rupees One Hundred Only. If a buyer/transferee of an Immovable Property wishes to save Stamp Duty, then he may first purchase only a small undivided share in an Immovable Property upon payment of the requisite stamp duty as applicable to Conveyance on that portion of the Property and become a Co-Owner with the Seller/Transferor. Thereafter the Seller, now a Co-Owner can renounce his claim on the balance share of the Immovable Property, for any consideration, by executing a Relinquishment Deed on a stamp paper of Rupees One Hundred only, which is perfectly legal.

However, the said ‘Release’ should be renouncement of claim in the Immovable Property and should not be in favor of any particular Co-Owner (incase of there being more than one co-owner) or else the same will be stamped as per an Instrument of ‘Conveyance’.

(Rajat Wadhwa is a practicing lawyer in Delhi High Court for the last 17 years. Views expressed above are personal to the Author.He can be reached at his email: wadhwa_co@yahoo.co.uk)