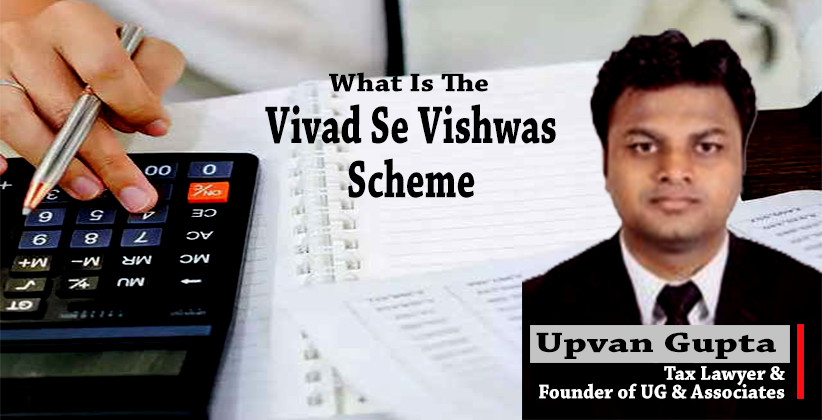 In a recent development, Advocate Upvan Gupta - Tax Lawyer and Founder of UG & Associates has given forth his views on the newly introduced ‘Vivad Se Vishwas Bill, 2020’ saying -

“The Vivaad se Vishwas Scheme is aimed at curbing widespread direct tax litigation involving locking up of tax revenues amounting more than INR 9 lakh crores. The scope of the scheme, in addition to matters pending in litigation, has been enhanced to cover Debt Recovery Tribunal matters (‘DRT’), search and seizure cases involving recovery below INR 5 crores and appeals filed by the Income Tax Department with settlement at 50% tax payment only. The Scheme is a boon for taxpayers facing litigation on account of cash deposits made during demonetization and others involved in arduous search/ seizure proceedings.”

He further stated that, “In addition, taxpayers involved in low value disputes can also avail the scheme to save time and cost involved in litigations. The Government has made it clear that availment of scheme shall not set any precedent either upon the taxpayer or upon the Income Tax Department. Infact, the keenness of Government to reduce litigation can be well visualized from the fact that success of the scheme has been linked with annual performance assessment of the tax officers.”

In order to resolve the disputes relating to direct taxes, Finance Minister Nirmala Sitharaman had introduced a Bill in the Lok Sabha on the 5th of February, 2020 (Wednesday) to further impose an effect on her 1st February's Budget announcement. As seen on November 30th, 2019, the aggregate of the direct taxes has been INR 9.32 trillion. The Direct Tax "Vivad Se Vishwas" Bill of 2020 offers a waiver of interest, penalty and prosecution for settlement of the disputes. The disputes have to be pending before the Commissioner (appeals) in the Income Tax Appellate Tribunal (ITAT), High Courts, and Supreme Court's as dated January 31st, 2020. A complete waiver of interest and penalty will only be given in cases of payment made by March 31st, 2020 further to which an additional 10% disputed amount will have to be paid.

The Bill states that the amount of time, energy and resources required by the tax disputes is huge. And this further leads to the government's deprivation in the revenue collection. The taxpayers as well as the government will be benefited out of the scheme. It will be noted that a pending appeal might be against a disputed tax, interest or a penalty in relation the orders that will be assessed or reassessed. The appeal can also be against the determination of taxes on the defaults relating to the deduction of taxes or collection. It also states that 25% of the disputes penalty or interest needs to be paid pertaining to cases of disputed interests during the settlement of appeals upto March 31st, 2020. Following 1st April, 2020 it will be 30% of the penalty rates. The Budget has scaled the direct tax collection Target to INR 11.7 trillion in the estimates for fiscal year 2020. A year to year would require at least a 2.9% growth rate. The Bill will prove useful by helping reduce the government's litigation expenditure and further help in the process of revenue generation. The Bill is supposedly expected to resolve 483,000 direct tax disputes pending in the tribunals.

The Sabka Vishwas Scheme of 2019's Budget session of reducing litigation in indirect taxes helped settle over 1,89,000 cases. The scheme will not apply to the cases that are filed for prosecution in the failure of tax payments. The Central Board of Direct Taxes (CBDT) has asked its offices for the provision of data on pending appeals in High courts across the country by next week. The appeals have to be pending as on January 31st, 2020. This will be essential in helping prepare the groundwork for direct tax resolution.