Due To Non-Compliance with IT Rules 2021 Twitter's Safe Harbour Immunity under the IT Act removed : GOI to Delhi HC 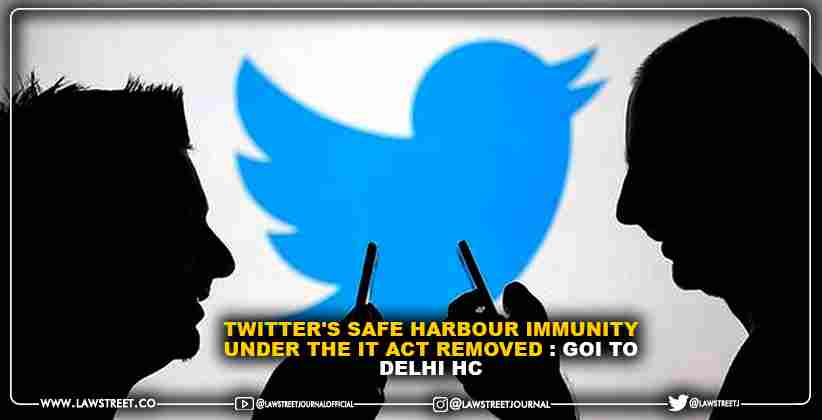 In an affidavit to the Delhi High Court, the Ministry of Electronics and Information Technology (MeITY) of the Government of India stated that Twitter's Safe Harbour Immunity under the Information Technology Act, 2000 (IT Act) is no longer available because it has not "fully" complied with the IT Rules, 2021.

"An intermediary shall not be liable for any third party information, data, or communication link made available or hosted by him," according to Section 79 of the IT Act, providing Safe Harbour protection. That means that, if the platform, third parties (users) abuse the infrastructure, middlemen such as Twitter and Internet Services Providers (ISPs) cannot be punished.

The protection is only guaranteed if the intermediary does not 'initiate the transmission, "select the receiver of the transmission,' or 'modify the information contained in the transmission.' This means that as long as the platform acts solely as a medium for carrying messages from user A to user B, without interfering in any way, it will be immune from legal action.

Twitter is a Significant Social Media Intermediary ("SSMI"), according to MeITY, as defined by Rule 2(1) (v) of the IT Rules 2021. As a result, it is required to observe the requirements of the Rules, 2021, as all intermediaries must comply with the due diligence duties u/R.3 and R.4 in order to get liability exemptions under S.79(1) of the Information Technology Act, 2000. According to the government, "all SSMIs have been given a sufficient period of 3 months to comply with the extra due diligences laid forth under Rule 4 of the IT Rules, and compliance with the R.4 duties will be required from 26.05.2021 onwards."

Furthermore, Rule 7 states that if an intermediary violates these Rules, the provisions of S.79 (1) will not apply, and the intermediary will be accountable for any punishment under any legislation in effect at the time in relation to the offending content. According to the centre, despite the fact that all SSMIs were given three months to comply with the IT Rules 2021, Twitter has failed to do so, resulting in Twitter "losing its immunity afforded under S.79(1) of the IT Act, 2000."

The tweets were as follows:

Mahua Moitra (@MahuaMoitra): Welcome to our Susu Potty Republic! Drink Gaumutra, spread cow dung, and flush the rule of law down the toilet. @DelhiPolice issues a warning to twitter and shows up at their offices for correctly identifying @BJP's bogus document as manipulated media. So there you have it.

Swati Chaturvedi (@bainjal): Modi would have been allowed to nominate his favourite Gujarat IPS official Rakesh Asthana if Bobde had been Chief Justice of the Supreme Court. What a difference a CJI who adheres to the law can make.

On Monday (May 31, 2021) the Delhi High Court issued a notice in the case. On Friday (May 28, 2021) Sr. Adv. Sajan Poovayya, representing Twitter, told the court that they had previously established a Resident Grievance Officer in accordance with the Rules.