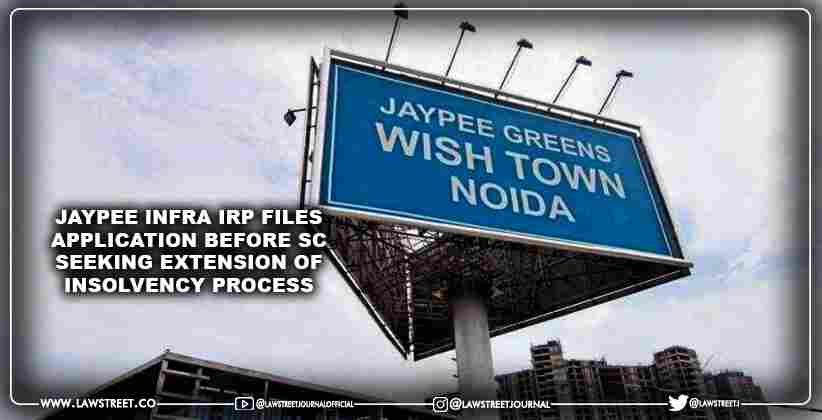 Infratech's Interim Resolution Professional (IRP) Anuj Jain has filed an application before the Supreme Court seeking extension of timeline for completion of its resolution process till the first week of July.

State-owned NBCC and Suraksha group are in the fray to acquire the debt-laden realty firm (JIL) and complete over 20,000 pending flats for homebuyers.

The 45 days' time granted by the Supreme Court to complete the Corporate Insolvency Resolution Process (CIRP) expired on May 8th 2021.

In the last meeting of JIL's Committee of Creditors (CoC), Jain informed that an application was filed before the court on May 6th 2021 to seek an extension by 30 days, sources said.

On the instructions of the CoC members, Jain filed another application on June 3rd 2021 seeking further extension by 30 days. The applications are likely to be heard in the first week of July, they added.

Jain informed the CoC that the CIRP of JIL has to be completed by July 7th 2021, subject to the Supreme Court's decision on extension of timeline.

He also said all decisions taken by the CoC after May 8th 2021 related to the approvals of resolution plans submitted by the two contenders will be subject to the decision of the apex court on the two applications filed on May 6th 2021 and June 3rd 2021 seeking extension.

Earlier this week, the financial creditors decided to consider the bids of both state-owned NBCC and Suraksha group to acquire the embattled realty firm at their next meeting scheduled on June 10th 2021 (Thursday).

Just before the start of the meeting of the CoC on Monday, Suraksha group submitted its revised bid, offering more funds to banks while reducing the timeline to complete some stalled projects for benefit of homebuyers.

This is the fourth round of the bidding process in the matter of JIL bankruptcy case.

JIL went into the insolvency process in August 2017 after the National Company Law Tribunal (NCLT) admitted an application by an IDBI Bank-led consortium.

In the first round of insolvency proceeding, the Rs 7,350-crore bid of Lakshadweep, part of Suraksha Group, was rejected by lenders.

The CoC had rejected the bids of Suraksha Realty and NBCC in the second round held in May-June 2019.

The matter reached the National Company Law Appellate Tribunal (NCLAT) and then the apex court.

In November 2019, the Supreme Court directed the completion of JIL insolvency process within 90 days and ordered that the revised bids be invited only from NBCC and Suraksha.

Then in December 2019, the CoC approved the resolution plan of NBCC with 97.36 per cent votes in favour during the third round of the bidding process.

In March 2020, NBCC had got approval from the NCLT to acquire JIL.

However, the order was challenged before the NCLAT and later the Supreme Court, which on March 24 this year ordered that fresh bid should be invited only from NBCC and Suraksha.

The apex court had also directed that the resolution process be completed in 45 days, which lapsed on May 8th 2021.