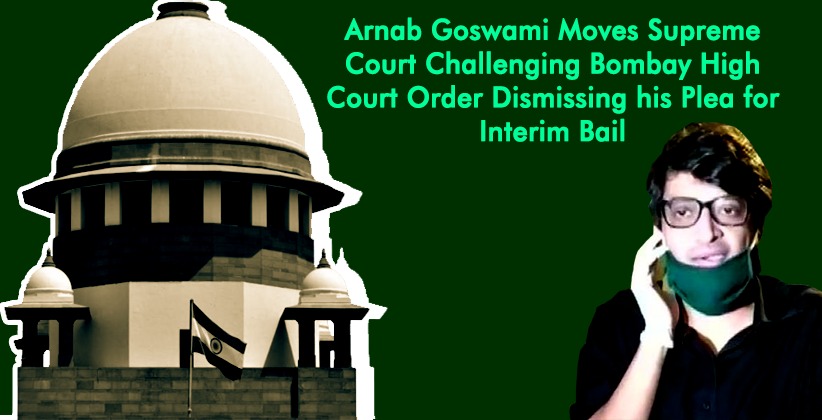 Republic TV editor Arnab Goswami moved the Supreme Court after the Bombay High Court dismissed his petition for interim bail in the 2018 abetment to suicide case.

Arnab Goswami along with two others Feroze Shaikh and Nitish Sarda by Alibag Police and remanded to judicial custody for 14 days on November 4, 2020 in connection with the death of interior designer Anvay Naik and his mother Kumud Naik in 2018.

Arnab Goswami had filed an interim bail plea before the Bombay high court on Saturday (November 7, 2020).

The court had reserved its order on Arnab Goswami’s plea and given him an option to file the application in sessions court and he then filed a bail plea before a session’s court.

Arnab Goswami was kept at a local school designated as a Covid-19 center for the Alibag prison till November 8, after which he was shifted to the Taloja jail in Navi Mumbai.

Arnab Goswami alleged that he was being subjected to torture and was not being allowed to talk to his lawyer.

The decision to move him to the jail before he completed his quarantine period at the school was taken after he was allegedly found using someone’s mobile phone to access his social media accounts in the quarantine center.

His mobile phone was confiscated by the police at the time of his arrest.

A bench of Justice DY Chandrachud and Justice Indira Banerjee will hear the petition at 10.30 am on Wednesday.