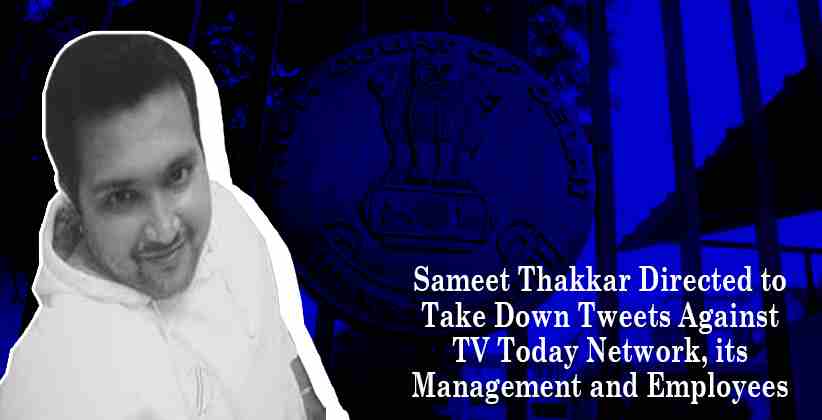 On Wednesday (18th November), the Delhi High Court directed Sameet Thakkar to take down the Tweets allegedly posted against TV Today Network, its management and employees from his twitter account within 48 hours.

This was heard by a Single judge bench consisting of Justice Mukta Gupta. The plaintiff had given 29 sets of URLs, which were not removed by defendant No. 1 till date.

“Defendant No.1 is directed to take down the said URLs from its Twitter account within 48 hours of the receipt of copy of such replication from the learned counsel for the plaintiff, failling which the plaintiff would write a letter to the learned counsel for the defendant No.3 (Twitter) giving the specified 29 sets of ULRs as provided in Para 11 of the replicaation, which the defendant No. 3 (Twitter) will take down within 72 hours thereafter,” the Court said in its order.

Further hearing of this matter has been listed on Thursday (14th January, 2021).

Very disparaging and derogatory language were used by Sameet Thakkar in the tweets against the TV Today Network Limited and its management and news anchors who appear on the their channels Aaj Tak and India Today.

It was stated in the plaint that the allegations made by Sameet Thakkar are completely baseless and have also now been picked up by other persons who are retweeting the TV Today Network Limited’s tweets.

The Counsel appearing for the plaintiff, Hrishikesh Baruah, submitted before the court that Mr. Aroon Purie and Mr. Rahul Kanwal- the anchor and other top management enjoy enormous goodwill and reputation in the industry, and making baseless allegations and using of derogatory and disparging remarks against them has caused personal injury to thier reputation.

On 6th May, 2020, the Delhi High Court gave the following order:

“The tweets make wild allegations and also used derogatory and defamatory language against the Plaintiff, its management and its employees. The tweets are also very offensive and some contain abusive language. Such a campaign against the Plaintiff, its management and employees can be extremely damaging to thier reputation and also cause personal injury to them and their family members. The tweets are in bad taste and use objectionable language including abuses.”

The court further stated, “This court is of the opinion that a prima facie case is made out for grant of interim relief to protect the Plaintiff until the defendant enters appearance in the matter. Balance of inconvenience is also in favour of the Plaintiff and irreparable injury could be caused to the reputation of the plaintiff which is a well established media company as also its management and employees if protection is not granted.”

Sameet Thakkar was directed later by the Court to use restraint from publishing any defamatory or derogatory posts/tweets or making abusive remarks against the Plaintiff, its management, employees including news anchors and thier family members either through his twitter handle or on any other social media platform or any other print/electronic medium.