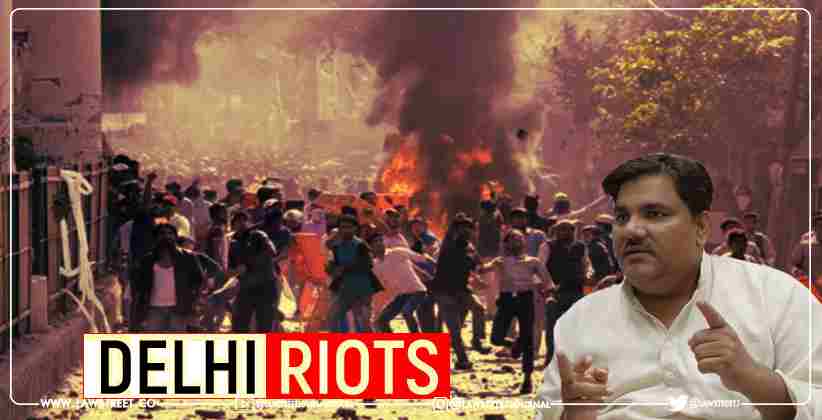 A Delhi Court on Friday, April 09, 2021, granted bail to one Kasim, an alleged associate of Tahir Hussain (principal accused) facing trial in connection with the Delhi riots who was accused of firing and hurting a 19-year-old Prince Bansal while being part of a riotous mob which was allegedly involved in pelting stones, throwing petrol bombs and firing gunshots on "people belonging to other community" from former AAP Councillor Tahir Hussain's terrace.

Bail was granted by Additional Sessions Judge Vinod Yadav after observing that the injured Prince Bansal had "not specifically named" Kasim in his complaint, that the "statements of witnesses were undated" and that the investigating agency "did not accord any suitable or plausible explanation" on this behalf.

While granting bail, the Court further observed "Needless to say, investigation in the matter is complete and chargesheet has already been filed; trial in the matter is likely to take a long time; the applicant cannot be made to incarcerate in jail for infinity merely on account of the fact that other persons who were part of the riotous mob have to be identified and arrested in the matter."

According to the statements recorded by the IO, Prince had alleged that one of the persons belonging to a riotous mob, which was pelting stones, throwing petrol bombs and firing gunshots from Hussain's terrace, had shot him resulting in him sustaining injury.

While it was the case of the prosecution that the bail application must not be accepted as the investigation is still in process, Kasim had sought bail on the ground of parity. It was submitted by Kasim that other co-accused persons were already granted bail by the Court and that his case is at a much better footing than that of one Tanveer Malik, who had been granted bail by the High Court.

Arguing that the statements of prosecution witnesses were undated and no explanation was given by the investigating agency to justify it, it was argued that there was no justification for the fact that Constables, who were alleged to have witnessed the incident, waited till the registration of FIR to name Kasim and did not report the matter immediately in the Police Station.

Apart from the ground of parity, it was also submitted by the counsel appearing for Kasim that just because he was declared of "Bad Character" in his locality, he was falsely being implicated in the case. Moreover, it was also alleged that he was neither been specifically named in the FIR nor any recovery was made from him. Additionally, It was contended that there was no electronic evidence, either in the form of CCTV footage or CDR location, against him. It was also submitted that the TIP as regards Kasim was not conducted in the matter. Furthermore, noting that it was a matter of record that Prince had not specifically named Kasim in his complaint, the Court observed that Kasim was even "not visible in any CCTV footage" being shown on record. Moreover, the Court also took note of the fact that there was "no recovery" of any sort from him.

Quoting "At this stage, it is further noted that as per the chargesheet filed in the matter, the role assigned to co-accused Tanveer Malik is of firing towards the persons/members of another community; whereas the role attributed to the applicant is merely of stone-pelting and taking active part in the rioting activity. Thus, I find substance in the submissions of learned counsel that the role assigned to applicant is on a much better footing as compared to the role attributed to co-accused Tanveer Malik." The Court also found merits in the argument made by Kasim's counsel suggesting that the role assigned to Kasim is much better than that of Tanveer, co accused who had been granted bail by the High Court.

Noting the aforementioned, the Court went ahead to observe that Kasim cannot be made to incarcerate in jail for infinity merely on account of the fact that other persons who were part of the riotous mob have to be identified and arrested in the matter. In lieu of this, the Court granted bail to Kasim on the ground of parity subject to n his furnishing a Personal Bond in the sum of Rs.20,000 with one surety in the like amount.