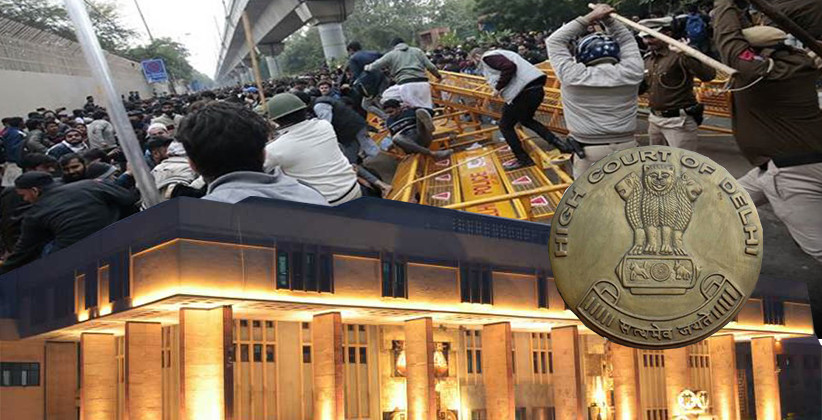 The Delhi High Court on 4 February, 2020, extended the deadline to 29 April, 2020 for both the Centre and the Delhi Police to respond to the plethora of petitions filed on the Jamia Millia Islamia University campus violence. The division bench comprising of Chief Justice DN Patel and Justice C Hari Shankar have given the order regarding the violence that ensued at the University on 15 December, 2019.

Solicitor General (SG) Tushar Mehta, appearing on behalf of the Centre, put forward that the investigation of the Delhi Police was at a very crucial stage and therefore more time was sought for a reply.

One of the counsels appearing for the petitioners contended that 93 students had given cognizable complaints on the attacks on them and attached visuals of CCTV cameras. He further asked for some relief to be provided to the students by registering the FIRs on the basis of all the complaints.

SG then argued that the matter should be looked into in consolidation instead of filing multiple FIRs for the same.

The Hon’ble High Court had asked the Centre and Delhi Police for a reply of this matter on 19 December, 2019.

One of the petition states that 452 tear gas cannons were fired, in highest ever numbers since 2012. It also alleged that the Chief Proctor of the Jamia Millia Islamia University never permitted the Delhi Police to enter the campus. Further claims state that 52 students have been seriously injured and no medical assistance has been provided to them. Allegedly, the petitioners sought an independent enquiry because according to them the police cannot be expected to investigate the matter being a party to the case itself. Advocate Vinay Garg, appearing for the Petitioner, argued that the police should be prevented from initiating any proceedings against the students. All petitions relating to protests in Delhi were merged and heard together including petitions challenging detention, seeking relief and release of Jamia students.

Numerous petitioners have moved the High Court seeking remedies including forming a fact-finding committee to probe the violence that took place after the Delhi Police allegedly attacked students protesting against the Citizen (Amendment) Act, 2019 at Jamia on December 15.