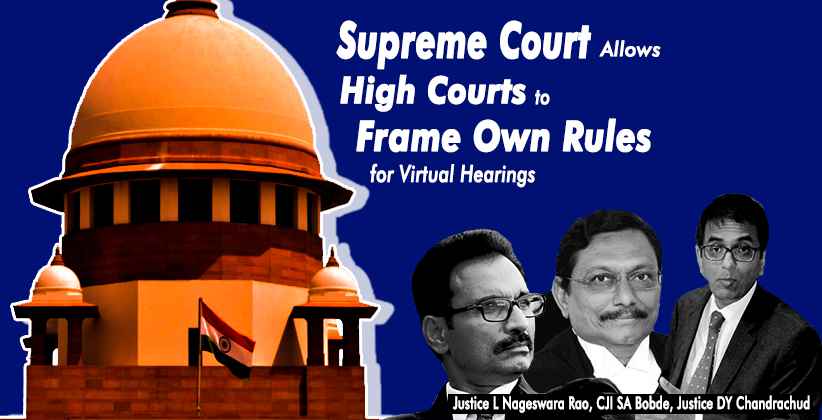 Judiciary Oct 27, 2020 Richa Shah ( Editor: Ekta Joshi ) 2 Shares
2 Shares
The Supreme Court modified a part of the guidelines issued on virtual hearings during COVID-19 and informed that High Courts may follow their own rules on video conferencing.

The bench consisted of 3 judges: Chief Justice of India S.A. Bobde, Justice DY Chandrachud, and Justice L Nageswara Rao. They stated that the rules framed by a High Court for virtual hearings will not only cover appellate proceedings but cover trial matters also. On Monday (26th October 2020), Justice Chandrachud revealed that own rules for virtual hearings based on the model rules formulated by the Supreme Court’s e-Committee have been already implemented by 11 High Courts.

CJI Bobde also added that the courts which have not framed rules until now can do so, and in the interim, they will follow rules framed by the Chief Justice of that High Court. A suo motu cognizance of a letter written by Senior Advocate who was also the former Supreme Court Bar Association (SCBA) President Vikas Singh was taken by the court. He had suggested measures for use of technology for conducting hearings in courts.

He made some suggestions for easy access to hearings in the Supreme Court: "There should be a cubicle area in the annex building where lawyers can attend virtual hearings. Transfer pleas and bail pleas can be heard by only VC. Media needs to be given separate kiosks to cover any proceeding so that corridors are not flooded by them and they can be at ease."

CJI Bobde responded to this by saying that the media should only have access to output and not the input. Attorney General of India, KK Venugopal stated that though video conference hearings were largely successful in the country the process was damaged due to the technical glitches in the process. He raised a question for the court asking whether e-Committee could advise on which was the best platform for such proceedings. Justice Chandrachud, who is also the Chairman of the e-Committee, stated that the Court has issued tenders so that a common platform can be used for all Supreme Court proceedings. However, for the High Courts and the trial courts, the situation was a little different. He said,

"For High Courts and District Courts, we will have a national tender so that a common virtual hearing platform can be there. Right now, every High Court is either on Zoom, or Cisco or Vidyo."

A committee of four High Court judges who formulated rules for video conferencing was formed by the court and the rules were circulated to all High Courts. 11 High Courts have adopted these rules. CJI Bobde then said, "We propose to allow the High Courts to frame their own rules for video conferencing for themselves and trial courts...equipment or WiFi differs from High Court to High Court. There is a difference in the degree of e-literacy among advocates too." Justice Bobde asked the Centre whether it can give fiber-optic network access to the judiciary so that virtual hearings can be conducted at ease. A meeting is to be convened between the Union Law Ministry and the National Informatics Centre (NIC) to discuss the fiber optic network feasibility.